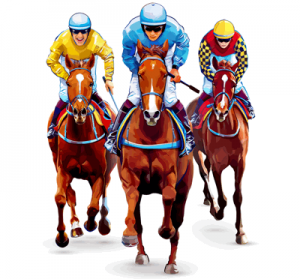 As you might imagine, there are numerous different types of race that are run during the jump racing season. Young horses aren’t exactly likely to be thrown straight into a race like the Gold Cup, instead needing to gain experience and work their way up through the ranks in a similar way to how footballers don’t just start playing in the Premier League.

It’s not a dissimilar situation for jockeys, with many gaining experience by taking part in ‘easier’ races before graduating to the tougher events later in the career. Some of the race types are actually quite similar to each other, differing not because of their difficulty level but because of their length or what they ask competitors to do.

On this page we’ll give you a brief explanation of the different race types that you’re likely to encounter at Cheltenham racecourse and during the National Hunt season in general.

If you’d like to know more about them then click on the race type and you’ll be taken to a different page with more in-depth information available.

There are no amateur horses, with inexperienced ones given a different name. If you see an amateur horse race then it’s a reference to the jockeys taking part in it. Amateur riders are not licensed professionals but are earning their stripes.

This is a title given to races that are considered to be the most prestigious ones at a meeting or Festival. The perfect example is the Gold Cup during the Cheltenham Festival. There are countless brilliant races, but the Gold Cup is the pinnacle.

The clue is in the title here. These race types have certain conditions applied to them, such as the amount of weight that a horse has to carry. Often this will be dictated by something like their age, with weight-for-age races being the best example of a conditions event.

These are often the longest race run at a meeting, quite literally being run across countryside. They usually feature different obstacle types than a standard race and they are commonly run by specialist horses that have been bred to last the distance.

Simply put, this is when a cup is available to the winner of the race. There are numerous races that bear the title of Gold Cup, for example, even though the Gold Cup run during the Cheltenham Festival is the most famous of the lot.

A fillies’ race is a race that is restricted to female horses under the age of three. As with mares’ races, the distance, weight and other information put on the race will differ from event to event, with the key information being that only young females can take part.

There are 15 Grade one races at Cheltenham, 14 of which ate at the festival.  This is the most elite level of jump racing with a minimum rating of 130 required, dropping to 120 for novice steeple chases. Grade 1 races are all Weight-For-Age and include the biggest races such as the Gold Cup, Champion Hurlde, Queen Mother Champion Chase and the Stayer’s Hurlde.

Grade 2 races, as you might expect, are not quite as elite as Grade 1 but these still represent some of the biggest racing on the National Hunt calendar.  With the festival packed with so many Grade 1 races there are actually only two grade 2 runs at the big event.  Other Cheltenham meetings however are packed with Grade 2 races, including the Relkeel hurdle, Dipper Novices’, International hurdle and many more.

There used to be approximately as many Grade 3 races as Grade 1 races on the National Hunt calendar, however, these have now been removed entirely since Grade 3 handicaps were rebranded as Premier Handicaps in 2022 (see below).

The new Premier Handicap races at Cheltenham are split fairly evenly between the Festival and the other meetings at the course.

In 2022 the BHA decided to change all Grade 3 handicap events to a new classification called Premier Handicaps.  This was to prevent confusion over what Grade 3 races actually are by splitting off the handicaps into their own classification.

The races themselves do not change, the Premier Handicap rating is in effect equivalent to Grade 3.  All these races are Open Handicaps. That means that any weight addition carried by the horses is dictated by the horse’s official rating.  Big races include the Coral Cup, Grand Annual Chase and the November Gold Cup.  Not forgetting too that the Grand National is a now a Premier Handicap race!

Listed races are class 1 elite races that have not reached a grading standard yet.  The classification tends to be more fluid with listed races often promoted to grade races after a certain time.  These are still top class races and include more mares’, novice and standard open flat races compared to Grades 1-3.

The idea of handicap races is that horses are allotted weight to carry depending on their ability. In a perfect world a handicap race would finish with all horses crossing the finishing line at the same time, but usually this is when a horse’s class and ability shines through.

These races feature hurdles, which are less aggressive and difficult to jump than steeplechases. This race type is a minimum distance of two miles and must feature at least eight hurdles. The obstacles are made of panels that are at least 3.5 feet high.

Because hurdles are easier to negotiate than fences, the races are often much faster than steeplechases. It’s not uncommon for former flat race horses to graduate to become hurdlers, keeping a low jump height so as to maintain speed as much as possible.

These races are specially for horses aged three to four years old. Every horse becomes another year older in January, regardless of when in the year they were born. A horse that was born in February would, therefore, be older than one born in December but they’d both be classed as 3.

These races are for horses that have yet to win a race under the code that it’s being run in. There is no specification to the likes of the distance, sex or age of races that come under the Maiden bracket, with the only thing of note being the the participants haven’t won a race of that type yet.

‘Mare’ is the title given to an adult female horse, which in jump racing typically means aged three or over. A race for mares means that it is only open to horses that are adult females, with males excluded.

There can be other conditions applied to a mares race, so it could be a handicapped race or run over a different distance to another mares race. The only thing that the word ‘mares’ denotes is the sex and minimum age of the participants.

It sometimes surprises people that there are flat races at National Hunt meetings, but they’re actually a common occurrence. Mostly they are used to give young horses with limited jump racing experience the chance to run on courses without needing to be tested too much.

You’ll often find them referred to as either Bumpers or Standard Open Flat Races, but they amount to the same thing. They are races run on jump race courses that do not involve any actual jumps, instead asking the horses to run the course on the flat, obviously.

Sometimes referred to simply as a ‘chase’, steeplechase races are run over fences. These fences can come in different shapes and sizes, including water jumps or open ditches. They are a minimum height of 4.5 feet, or 1.3 metres, and are usually made of spruce, birch or a mixture.

It’s common for horses that take part in steeplechases to be older, more experienced and more physically able to cope with the rigours of the race. Around forty racecourses in the UK can stage steeplechases, such as Aintree and Cheltenham.

There are often races that require horses to qualify for them, with the qualification races known as trials. There are also some races that are seen as a good trial of a horse ahead of the main even, such as can be watched during Festival Trials Day at Cheltenham every January.

Much like Cup Races, this type of race is one in which there is a trophy available to the winner. A good example is the Brown Advisory & Merriebelle Stable Plate Handicap Chase, which takes place during the Cheltenham Festival and the winner is given the plate that it’s named after.

As time goes by races are removed and added to Cheltenham meetings to keep the racing fresh.  Any previous races at Cheltenham that we have covered that have been discontinued since can be found on this page.