Best odds guarantee is provided so widely by UK bookmakers and betting sites now and it has been around so long that most of us take it for granted that we have best price protection when betting on the day on UK and Irish racing.  The shock move from Paddy Power to remove the concession from 16 British race tracks has, therefore, caused quite a stir among customers.

The best odds guarantee is a concession that gives customers better odds if they back a horse at a fixed price on the day, or sometimes in advance for big meetings like the Cheltenham Festival.  BOG protection means if the starting price (SP) is higher than the fixed odds you took you will automatically be paid out at the higher SP odds.

All the major UK betting brands have offered a best price guarantee for UK and Irish racing for the last 5-10 years and as such it has become a core feature for sites.  The move by Paddy Power to remove the guarantee for select courses will undoubtably mean a loss of customers who like to bet on races at those tracks.  Along with that they have been lambasted on social media for the move.

Why, then, would Paddy Power make such a decision?  Well, of course, as it with most things it largely comes down to money and as you will see further down they spent over £62 million in extra payouts due to the best odds guarantee in 2022.

What Are The 16 Tracks Not Covered By BOG?

Why those tracks?  Well, all of those courses are owned by ARC racing and leisure group.  The 16 courses they own host over 570 fixtures, representing around 40% of all fixtures in British racing.

The group were established a decade ago and have grown significantly since.  They own more all weather tracks than any other course operator, three of five in the country, and were part of the driving force behind the introduction of the All-Weather Championships.  They also own greyhound courses such as Belle Vue and Perry Barr.

It is not clear what issue in particular Paddy Power have with the ARC Group but whatever it is Paddy Power are exposing themselves to a lot of agro and lost business as a result.

Why Have Paddy Power Done It? 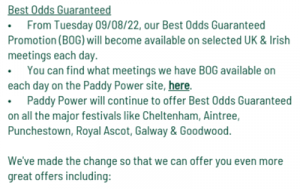 Paddy Power are no longer an individual brand.  The are part of the Flutter Entertainment super group that also owns Betfair and Sky Bet, along with a load of gaming, casino and poker brands.  Sky Bet had already reduced their BOG offering to selected racing and so the move is not out of character overall.

Whether Paddy Power or Flutter have some specific problem with ARC is unclear.  It could have something to do with ARC broadcasts of their racing, perhaps there was a dispute over the payment rates or something like that.

It could be that generally the ARC courses are seen as those that host more minor mid-week and all weather fixtures.  While they host two fifths of all races they don’t host any major festivals and so PP may see this as a way to recoup revenue on a large amount of races while not affecting the major racing that they offer.

Why, then, wouldn’t they also limit BOG at other more minor tracks owned by other groups like the Jockey Club?  Perhaps not to annoy them?

Ultimately the move has the potential to make racing less popular at the tracks BOG has been removed from and so Paddy have decided to just dump all the ARC tracks while leaving the others.

There are those who think that the best odds guarantee is being removed now because they were originally introduced to compete with exchanges and now they feel that threat is no longer as great as it was. Especially given Flutter own Betfair too and so in effect already have pretty much all the exchange business.  Maybe they feel there is no point PP competing with Betfair as it is ultimately just shifting revenue around.

It’s not only Betfair they compete with, though, racing punters, especially those that bet outside of the big races and like all weather betting, are likely to simply move to another bookmaker that still offers best odds guarantee on those tracks.  PP risk not only losing the business for those 16 courses but potentially other horse racing too as punters feel let down by their decision to remove the concession for ARC Group courses.

Revealed PP Paid Out More On BOG Than Other Rewards 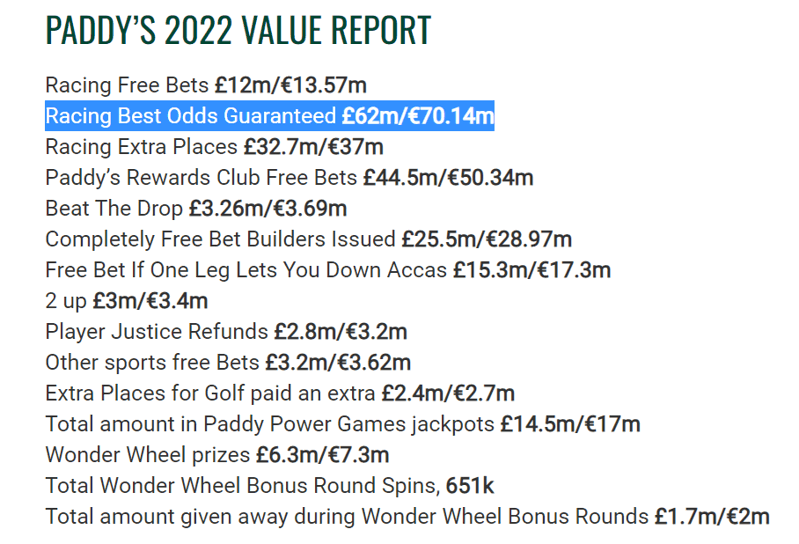 At the start of 2023 Paddy Power released a news piece detailing how much they had awarded to customers in free bets, cash and other rewards payouts over 2022.  The point of the article was to show how generous they supposedly are as a bookmaker, citing they gave away £229 million to punters in 2022.

What the report also shows is the breakdown of those give aways by product and type.  As you can see in the image above Paddy Power paid out an extra £62 million to punters in 2022 through the best odds guarantee for racing.  This is by far their most expensive promotion and comes in at £17.5 million more expensive than their weekly free bets club at £44.5 million.

When you consider how much BOG is costing it makes it easier to see why Paddy Power have decided to reduce the number of courses and races they offer the concession for.  These stats also include the period of August to December 2022 when they had already removed the price guarantee from the 16 courses mentioned.  It would, therefore, have likely been even higher in previous years.

There are arguments that media costs have gone up massively for showcasing and broadcasting racing and this is having an impact on betting companies.  The cost of living crisis and a likely recession on the horizon means betting companies are preparing for a period of stagnation or even loses in the near future and one way to quickly increase revenue is to cut concessions like BOG.

You may have already noticed there are generally less offers overall these days as tax has increased for bookies and the amount they now need to spend on compliance and responsible gambling measures has increased.  It is not a total surprise to see operators cutting things like BOG now on that basis, especially when you see it is Paddy Power’s most expensive offer, meaning it is likely similar with other operators.

Selecting just the ARC courses is also a tactical move as it covers 40% of racing but largely only affects more experienced racing punters who bet mid-week and on all-weather.  These are also the ones most likely to be getting the most out of the best price concession.

Other bookies may follow but they are not in the same position as PP.  Given Flutter own Betfair and the exchange is known for having better prices, especially for horse racing, than fixed odds bookies they probably feel they have themselves covered.  Other brands like bet365, Betfred and Entain operated brands like Coral and Ladbrokes do not have this luxury.  In fact, Ladbrokes sold the exchange they owned, BETDAQ, back to the original owner last year.

Most brands will certainly keep BOG for all UK & Irish racing and there is little risk of it disappearing entirely.  Indeed, some operators may even increase their BOG offering in order to entice the thousands of customers that will now be flocking from Paddy Power looking for a new bookie to place their racing bets with BOG protection.

Some Sites Going The Other Way With More Protection

This year Boylesports announced ‘Best Odds Guaranteed But Better’, which offers BOG on UK & Irish racing the day before the races too as well as on the day.  Bet365 offer similar for a lot of their racing.

Brands like bet365 and some others, such as Betfred, often have price promises too.  These provide even more cover than BOG because they are not only guaranteeing to match the SP they will guarantee to match the best odds offered by a select list of bookies.  These offers tend to be limited to big racing and televised racing but are still attractive to racing punters and generally come as added protection on top of BOG.

In the past some brands have offered BOG Plus, which not only matched the SP but gave an added bonus on top.  Those offers have disappeared these days and that may reflect the higher operating costs for betting companies and the difficulty in providing concessions that enhanced prices.

Ultimately, though, BOG is here to stay for now at least and Paddy Power’s loss will be someone else’s gain.  Whether the short term savings for Paddy outweigh the longer term customer loss and backlash remains to be seen.  Being owned by Flutter, though, means quarterly profits are the be all and end all and so it is not surprising really.