It looks as if high street bookmakers will start to reopen from the beginning of June, with William Hill planning a phased reopening over the next few months. It’s part of a wider plan for bookies to return to some degree of normality during troubling times, with hundreds of shops up and down the country having closed their doors when they were labelled as non-essential businesses.

Whilst it’s good news for high street bookmakers, the majority of whom are part of much larger chains that will have been getting some incoming from their online presence, what will happen to independent bookies that have their pitches at racecourses? Has the British Horseracing Authority done anything to protect them as the industry has gone into shutdown?

UPDATE 17th August: Trials will begin on the 18th August to allow bookmakers back to select courses.  This will commence with three meetings at Kempton, Fontwell and Beverley where on track bookies woill be allowed to offer betting services to owners initally.  If these trails prove sucessful further roll-out is expected by the end of the month.

When Will Punters Be Allowed To Return To Racecourses?

Most bookmakers that have pitches at the various racecourses around the country don’t have an online presence. Their income is made from horse racing alone, with little to no money being made as a result of the likes of the Bundesliga starting matches back up again. Even horse racing returning will do them no good if the sport follows German football and does so behind closed doors.

The government’s ban on mass gatherings was put in place in March with the specific idea of protecting as many people as possible, but a side effect of that is that businesses such as independent bookmakers have found themselves with no income. Even conversations about horse racing’s likely return offer little comfort, given that crowds won’t be coming with it.

The big question for the on-course bookmakers is what happens next. Whilst the industry itself considers plans such as limiting fields to a maximum of 12 runners and only allowing senior, experienced jockeys to return in order to limit the potential of injuries putting a strain on the National Health Service, little has been said about what bookies can expect to happen.

What The BHA Has Done

Does the British Horseracing Authority have a duty to try to protect on-course bookmakers? It’s a tricky question to answer, considering that bookies don’t really come under the jurisdiction of the BHA. The organisation is there to govern, administer and regulate horse racing as a whole, with specific prioritisation of the health and well-being of the participants of the sport.

How much that involves helping out bookmakers is a grey area. The reality is that bookies are more closely entwined with horse racing than practically any other sport, so a healthy betting industry is good for racing. The more that on-course and independent bookmakers struggle, the more that that will reflect on the sport and cause issues and problems further down the line.

Keith Johnson is a bookmaker that holds multiple pitches at courses all over the country. The wet winter caused him a quieter few months than he’d have hoped, but he was looking forward to summer to see things pick back up again. Then racing was suspended and he and most other bookies were left wondering what would happen. Whilst he understood the reasoning behind racing’s suspension, he’s worried.

The fact that most bookmakers and their staff are self-employed means that financial help from the government has been limited. With organisations like the BHA also not doing much to help, it means that the on-course bookmakers face a very uncertain future, with more than a few of them facing the reality of going out of business before racing returns to normal.

Can Racing Return To Normal Any Time Soon?

The reality that the on-course bookmakers face is that normality, whatever that is, is unlikely to return any time soon. Even if racing resumes behind closed doors, how can the industry plan for a return of racegoers to the courses? The truth of the matter is that social distancing on a racecourse is nigh-on impossible, given the numbers that would need to be admitted to make it financially viable.

Tattersalls and other areas of courses are pretty much designed for people to be crammed together, creating and enjoying the atmosphere that meetings like the Cheltenham Festival and the Grand National live off. How on earth could any sort of social distancing plan be implemented there? In seated areas they could only sell limited numbers of seats, for example, but stopping people mixing in stalls would be tough.

Bookies As The Centre Of The Spread

Brian Keenan, the famous on-course layer in Irish racing, is calling for major changes to the way that that side of the industry works in order to help on-course bookmakers out, but even if what he wants is put into action it will still be difficult for those bookies to operate with people on the course. It is, after all, a heavily cash-based side of the industry and how will that work in terms of reducing possible transmission?

When it comes to horse racing, the on-course bookmakers will be the most at risk of transmitting and being given something that they don’t want. Whether it be handling cash or giving people tickets with their bets on and then receiving those tickets back when they’re winners, the bookies are likely to be a hotspot area until and unless there’s a vaccine found. That makes their lives very difficult.

Irish bookmakers are hopeful that the outdoor nature of the business will mean that at least some people will be able to return to courses by September, but it’s difficult to see how that’s a realistic aim at the moment. Ray Mulvaney has talked of bookies using gloves and debit cards and other precautions, stating that bookies want to be ‘part of the solution’, but even using debit cards seems far from an idea solution.

Racing Will Need To Work Together 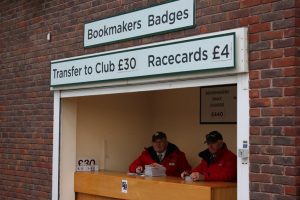 It’s understandable that the likes of the British Horseracing Authority might not put helping bookmakers at the top of its list of priorities, given that they believe racing will lose as much as £200 million because of the current situation. Yet someone has to think of the bookies, which are the lifeblood of the industry and the people who supply the odds for racing’s smaller meetings up and down the country.

In May the United Kingdom Gambling Commission decided that fines that were owed by seven on-course bookmakers for accepting bets from underage punters would be wiped. The decision was taken in light of everything that’s happening and the challenges that are being faced by the bookies. They will be pleased, having described the fines as ‘disproportionate’, but it is a sign of how the industry will need to work together to survive.