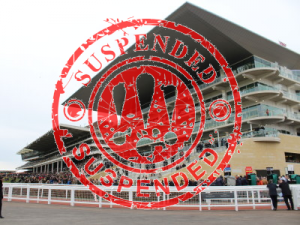 A bad week for Gordon Elliott just got a hell of a lot worse when the result of a Irish Horseracing Regulatory Board (IHRB) hearing on 5th March announced the trainer would be banned for one year, 6 months of which is suspended.  The ban comes following a temporary suspension introduced on Monday in the wake of a image that appeared online depicting Elliott sitting on top of a dead horse.

The ban means that no horses will now be able to race at the 2021 Cheltenham Festival or Grand National under his name, although plans have been made to transfer the horses at Cullentra stables to Denise Foster, another trainer in the yard, which will allow existing entries to compete.

Some runners have already been moved away from the trainer, notably Envoi Allen the unbeaten Marsh Novices’ Chase odds-on favourite who has moved to Henry de Bromhead, along with 7 other horses owned by Cheveley Park Stud and trained by Elliott.

Elliott is an Irish trainer, which means his license is in Ireland and he falls under the responsibility of the IHRB.  A hearing took place at Naas racecourse on Friday and found that Elliott had brought the sport into disrepute with “appalling bad taste” and  “an extraordinary lack of judgement” in breach of rule 272 part 1, which relates to some acting “prejudicial to the integrity, proper conduct or good reputation of horseracing”.

Six months of the one year ban are suspended and begins on the 9th March, meaning if there is no further fallout the trainer, with 1838 winners in his career to date, he can return in early September.  Elliott has also been fined €15,000.

Bad Week Gets Worse For Elliott 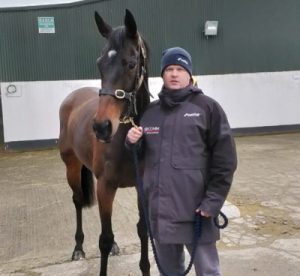 When an image emerged last Saturday of Gordon sitting atop a dead 7 year old mare, taken in 2019, it sparked outrage from those within and outside the racing industry.  To begin with most people assumed it was a faked image designed to defame him before Cheltenham, however, it quickly became apparent by Sunday that the picture was indeed genuine, with Elliott issuing an immediate apology.

Despite taking the time to explain the reasons why he was caught on camera sitting on top of a dead horse it has done nothing to quell the public outrage.  The photo was received badly in all quarters with criticisms from welfare groups as well as jockeys, other trainers, owners and staff within the industry.

The IHRB quickly notified us of their position early in the week, setting a hearing for Friday.  In the meantime Gordon was temporarily banned from entering horses and attending racecourses by the BHA pending that investigation.  Following that decision outrage continued to escalate through the week and considering the level to which that image and the act in question has brought horse racing into disrepute, it is no surprise a hefty ban was levied on the trainer.

The results of the IHRB hearing will stand in both the UK and Ireland and it is unlikely he will be allowed to race horses under his name anywhere else in the world.

Elliott himself has said that he is in this situation because of his own actions, which he is not trying to dodge.  He believes he is “paying a heavy price” for his error but has no complaints with the punishment. 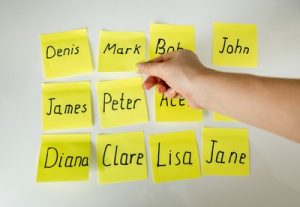 Elliot had initially entered 104 horses into the Festival this year, several of those have now moved yard, but it is now clear the Elliott stable will run the majority of those under a new the name of Denise Foster.  It means officially Gordon will have no runners under his name until late August / early September, at the earliest.

Jockey Davy Russell, who is currently sidelined, has been talked about for the role.  He was quick to dispel rumours on Thursday that he would take over the training.  The rider who has had a lot of success with Elliott is mainly concerned with getting back in the saddle.

Denise Foster was confirmed on Saturday, she has held a training license for 20 years starting her career with showjumpers before moving into racing.  The ‘sneezy’ nickname comes from her childhood where other children would mispronounce her name and it sounded like ‘sneezy’.  The fact that Cullentra stables has appointed someone with experience that is known to racing will help allay the fears of existing owners.

Initially a tweet from Elliott’s twitter account stated he would be there to “assist” Foster in the new role.  This was quickly deleted and replaced by:

“Denise is vastly experienced and her appointment is great news for staff and owners.”

In reality we all know it will ultimately still be Elliott making the big decisions.

The change in name is unlikely to worry owners too much given their horses will receive the same training, schedules, feed and care as they did previously.  Ultimately those horses will still be largely ‘trained’ by Elliott when it comes to planning in any case.  The main difference will be Gordon himself will not receive any credit for any winners produced over the next 6 months.

Although the technical side of Elliott’s ban is relatively easily fixed by administrative changes the longer term future for the Irish trainer is in doubt.  His reputation has certainly been damaged and many owners may feel they need to move their horses away from him to prevent damage by association.

One certainty we do know is that Tiger Roll will not run under Elliott’s name or Foster’s at this years Grand National, having been withdrawn by his owners due to unfavorable weight.  It is fairly ironic for Elliott to go from a trainer who was on the verge of winning an historic three consecutive Grand Nationals to someone who is banned from horse racing in the space of one week.

Will Owners Move Their Horses Away From His Yard?

Having already lost his superstar chaser Envoi Allen earlier this week, along with seven other horses to Henry de Bromhead and Willie Mullins, the biggest potential worry now is what Gigginstown House Stud, lead by Michael and Eddie O’Leary, will do.  They are by far the biggest owners with Elliott, with horses such as Tiger Roll, Abacadabras and Delta Work, and have been responsible for many of is over 1800 career victories.

So far Giggintown and O’Leary have been largely behind Gordon Elliott, suggesting they had no intention of moving horses following the temporary ban imposed on Monday.  They have said that they are “deeply disappointed by the unacceptable photo.” but have so far made no suggestions that they intend to move their substantial number of runners away from his yard.

Gigginstown are not the only trainers with Elliott, however.  Cheveley Park Stud have already moved their horses away from the tarnished trainer and it was possible that Noel and Valerie Moran, owners of Triumph Hurdle favourite Zanahiyr, may move their horses having previously said they would wait for the result of the hearing first.  On Saturday, however, the Morans announced they would be keeping their horses at Cullentra.

What is clear is that Elliott’s yard is likely to lose some horses, quite how many high profile horses he does lose may define his future following the ban.  Owners pay the majority of the revenue a yard earns through substantial training fees and of course less horses and owners means less income.  We may find that more horses move at the end of the season, with owners not wanting to damage their potential in the short term by moving them too close to big races.

Whether Gordon Elliott will be able to move on from this affair is too hard to say right now.  If he does stick with the sport then he faces tough times ahead.  It seems like he intends to come back, saying:

“I have a long road ahead of me but I will serve my time and then build back better.”

The Irishman has thing he has on his side, time.  Elliott rose to fame young, winning his first Grand National aged just 29.  The working life of a trainer is a long one and perhaps that will be his saving grace.  People are unlikely to forget about the disgraceful photo and its consequences but time is a great healer and perhaps one day he will be revered as a great trainer once again.  Sports also always need a bad guy and perhaps that is the role that Gordon will take from now on.

Is It A Good Idea To Move Horses So Close To Big Races? 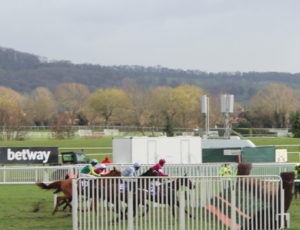 Generally horses only move when they are not performing to the levels owners expect and they hope by trying a new yard they may be able to get better results.  It is rare for horses who are at their peak condition to move, as is the case with many of Elliott’s runners.

It is certainly a big risk for an owner to decide to move a horse, especially so close to big meetings at Cheltenham and Aintree.  Moving a horse is not just a matter of different surroundings for the animal, there will be a whole different schedule in place for feeding, grooming and exercise.  The feed will also be different and horses can be very sensitive to changes in their diet.

Therefore what you can be sure of is any owners that have taken the decision to move away from Elliott will not do so lightly.  These are their prized assets, and costly assets at that, moving them is very much a last resort.  It makes better business sense in the short term to keep horses with the Elliott yard but perhaps makes better business sense in the longer term to move them away given owners will not want to be associated with the current situation.

It will be interesting to see how Envoi Allen performs in particular under Henry de Bromhead.  Being heavy favourite there is little wiggle room for the unbeaten star and if he loses the Marsh Chase I am sure most will put it down to him being moved so late.