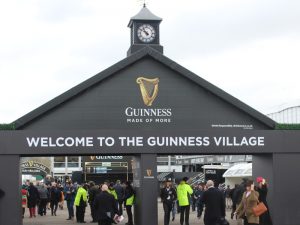 By the time St. Patrick’s Day comes around the Festival is well and truly underway, with punters and bookmakers having gone head-to-head numerous times to see who can come out on top. If the atmosphere has been good on the first couple of days then that’s as nothing to how things go up a notch now as the Guinness starts to flow.

The Irish invasion of Cheltenham is well-known, given that Irish trainers, jockeys and horses have had a love of the Festival ever since Cottage Rake won the Gold Cup in 1948. It’s entirely fitting that there’s a day given to celebration of all things Emerald Isle, therefore. That we live in an era when Willie Mullins is so dominant certainly helps the Irish cause.

Whilst what’s happening off the course and in the various bars on the racecourse is plenty of fun, it’s what happens with the horses that matters the most. In that sense we get to watch three Grade 1 races, two Grade 3s and a Grade 2 offering as well as the ungraded Fulke Walwyn Kim Muir Challenge Cup. In other words, there’s loads of brilliant racing to be had.

Perhaps nothing sums up why St. Patrick’s Day during the Cheltenham Festival is so beloved of the horse racing community quite like the fact that the day boasts not one but two feature races. Day One has the Champion Hurdle, Day Two the Queen Mother Champion Chase but Day Three has both the Ryanair Chase and the Stayers’ Hurdle. Exciting times indeed.

Rain over the weekend building up to the Festival had many believing that the Going would be Soft and Heavy to Soft in place. Then on Champion Day the weather was drier than the forecast had predicted, leading Simon Claisse, the Clerk Of The Course, to change the Going to Soft, Good to Soft in places.

That was obviously good news, but it was a short lived reprieve as more rain fell before the tape went up on the first race. It cleared by the time that the racing actually got underway, with sunny spells breaking through on Ladies Day. The same weather is expected for St. Patrick’s Day, with the rain likely to stay away until the Gold Cup becomes the feature race.

The Going is likely to be soft by the time St. Patrick’s Day rolls around, with limited chance of rain and the same speed of wind as racegoers will have experienced on the opening two days. St. Patrick’s Day, of course, sees the switch from the Old Course to the New, so the course will be less cut up than the first two days. That in turn will help the Going initially.

St. Patrick’s Day is a day for the Irish, but there are more than a few English challengers hoping to limit their celebrations. There are brilliant races everywhere you look, not least of all the Golden Miller Novices’ Chase that kicks things off. With two key races, however, it’s clear that the day boasts a focus. Here’s a look at what to expect.

Taking place over 2 miles, 3 furlongs and 168 yards is this Novices’ Chase that is dedicated to the memory of Golden Miller. It was a Grade 2 offering when it was introduced to the Festival in 2011 but was moved up to Grade 1 in 2014. It’s a race for horses aged 5 and over, with the following weight information:

Willie Mullins is the race’s most successful trainer and he’ll be hoping that Faugheen can help him continue his excellent record. The problem is that Nicky Henderson will be breathing down his neck all Festival long, hoping to reignite the tussle over the meeting’s most successful trainer, with many believing that Mister Fisher is the one to beat.

Mister Fisher made his Cheltenham chasing debut in December and impressed, promising much more when his stamina is tested. The only question is whether Itchy Feet might have something to say about the matter, given that Olly Murphy saw his charge win his first Grade 1 at Sandown at the start of the year. If the race is fast he should do well.

The Pertemps Final is likely to be extremely competitive this year, which will make for a thrilling race but a tricky decision in terms of bets. The Grade 3 race is run over 2 miles, 7 furlongs and 213 yards, featuring 12 fences. It’s for horses aged 5 and over with the weight that each one will carry decided by the handicapper.

The field size is always large, which adds to the competitive nature of the race. All of the horses have had to qualify for this by finishing in the top six of a Pertemps series event. To give you an indication of why many people think it’s so open, only 8 of the last 19 winners won their previous race heading into this one.

Gordon Elliott has won the last two outings of the Pertemps, with Sire Du Berlais his entry this year. Davy Russell won three in a row between 2016 and 2018, which is why more than a few horse raving lovers are tipping his charge, The Storyteller. Welsh Saint could offer a surprise, having won a few bumpers and enjoying his last couple of 3 milers.

The first of two feature races on St. Patrick’s Day, the Ryanair Chase is always a thrill to watch. There are 17 fences to jump during the 2 miles, 4 furlongs and 127 yards of the race, which is open to horses aged 5 and over. The weight information is as follows:

It’s a race that favours horses that know the Prestbury Park course, with ten of the last twelve winners having been successful at Cheltenham previously. It also favours experienced horses in another way, given that seven of the last eight winners were aged either 7 or 8 when they won it. That doesn’t necessarily mean anything, but you might want to bear it in mind.

It’s difficult to look past A Plus Tard for this one, who won the Close Brothers Chase last year and so has that Cheltenham Festival experience. Rachael Blackmore will be riding him, whilst her fellow female jockey Bryony Frost will fancy her chances on Frodon. There’s also the small matter of Min, who Willie Millins will be looking for something good from.

The second feature race of Day Three is the Stayers’ Hurdle. A race that is synonymous with Big Buck’s thanks to his four wins between 2009 and 2012, it’s a Grade 1 offering that features 12 hurdles across the 2 miles, 7 furlongs and 213 yards of its running. It’s for horses aged 4 and over, with a weight of 11 stone if they’re 4 or 11 stone 10 pounds if they’re 5 or up. Fillies and mares get a 7 pound allowance.

There’s no question whatsoever that all eyes will be on Paisley Park this year, given that Emma Lavelle’s charge has won eight out of eleven runs over hurdles. He won this race last year and there’s very little to suggest that he won’t do so again in the 2020 renewal. That he’s won all four of his starts this season merely serves to back up that way of thinking.

Of course, the issue when there’s an out and out favourite is that the odds lack any real value, so you might want to opt for the Each-Way market instead for the Stayers’. Ronald Pump might have an amusing name, but it’s surely City Island that is likely to challenge Paisley Park after winning the Baring Bingham last year.

Better known to some as the Brown Advisory & Merriebelle Stable Plate Handicap Chase, this Grade 3 race is run over 2 miles, 4 furlongs and 127 yards, with 17 fences to be jumped. It’s for horses aged 5 and over and it’s a handicap race. Siruh Du Lac won the race last year thanks to Lizzie Kelly’s riding and many people suspect that will be the case again this year.

Clondaw Castle might well have something to say about that, travelling well over this distance at Warwick in February. He also ran a solid race in last year’s Arkle, so has a decent amount of Festival experience. If you’re a fan of families doing well when working alongside each other during the Festival then you can take your pick between the Moores and the Skeltons.

Harry Skelton will be riding on the back of Oldgrangewood for Dan Skelton, whilst Jamie Moore will be in the jockey’s seat for Gary Moore’s Not Another Muddle. The latter is what you might term an ‘interesting’ consideration after doing well when coming fifth in the Grand Annual at last year’s Festival, whilst Oldgrangewood has won 2 out of 3 so far this season.

It’s all about girl power in the penultimate race of the day, which has been part of the Festival’s lineup since 2016. Open to mares aged 4 and over, the weight for 4-year-olds is 10 stone 8 pounds, whilst those aged 5 and over have 11 stone 2 pounds. Class 1 Weight-For-Age race winners take a 5 pound penalty, whilst Class 2 wfa or Class 1 handicaps take 3 pounds.

Whilst it has only taken place four times heading into the 2020 renewal, it’s still noteworthy that Willie Mullins has won every one of them. It helps that he’s able to enter so many into the race, with the Irish leading trainer having four running for him this time out. It might well come down to if there’s a jockey you like more than another on that front.

Minella Melody will be hoping that she can break Mullins’ domination for Henry de Bromhead and the fact that Rachael Blackmore is riding her is also noteworthy. Dolcita. Who Robbie Power is riding for Mullins, finished third behind Minella Melody in her last outing. Floressa is also one to watch out for, having won at Newbury in November.

The final race of St. Patrick’s Day is the Challenge Cup, which was first run at Cheltenham in 1946 and is aimed at amateur riders. It’s a handicap race for horses aged 5 and up, run over 3 miles and 2 furlongs with 21 fences to jump. Jamie Codd’s four wins make him the race’s most successful amateur jockey, so many will be looking out for Le Breuil this year.

It’s run over the same trip as the Gold Cup, so it’s fair to say that it asks plenty of the horses that run in it. That’s why 18 of the last 20 winners have run at least 3 miles in their previous race, working on their stamina. Deise Aba is the name many are talking about, despite only having four runs over fences to his name.

When it comes to Each-Way bets it can often make sense to bet on a horse that hasn’t actually done well in the season given that it will mean longer odds. That’s the case for Fitzhenry, who hasn’t won yet in this campaign but has finished in the places. Milan Native might be a fitting bet, given what’s going on in Italy at the moment, but lacks experience of a long race.

There’ll be plenty of Guinness spilt over the course of St. Patrick’s Day, with many of it being on account of the holders celebrating a win. It’s usually a day of non-stop excitement and there’s no reason to think that things will be any different for the 2020 renewal. There are any number of races this year that are far from certainties.

The open nature of the races means that it’ll be tricky to select your winners, but that also means that there’s likely to be a bit of value in the market. The only race that’s not the case for is the Stayers’ Hurdle, where Paisley Park is likely to run away with it.