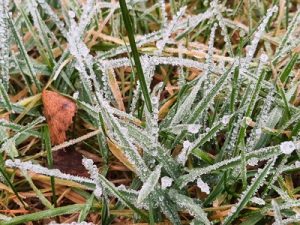 The Cross-Country Chase on Friday of the International Meeting was cancelled the day before the race due to frost caused by an unseasonable Arctic blast.  The cross-country course was too large to be covered but the other 6 races on the Friday card did go ahead, however, thanks to covers being used on the standard New course.

Covers were again deployed on the New course over Friday night into Saturday as frost was expected again.  This time, unfortunately, it wasn’t enough as temperatures dipped below -5 Celsius at the course overnight.

As soon as the Friday meeting ended staff at the course immediately began applying covers to the course again.  In total 40 acres of the course was covered in just 3 hours, a mammoth effort, but not enough to save the Saturday card in the end.

It follows a series of set backs in recent years for Cheltenham with the Friday of the November meeting in 2019 along with New Year’s Day and Trails Day meeting in 2021 all cancelled due to flooding, which was then followed by disruption caused by Covid.

It is unknown what will happen to the feature races on the Saturday card right now, notably the Grade 2 JCB Triumph Tria, Grade 2 Albert Bartlett Novices’ Hurdle and December Gold Cup Premier Handicap.  It is likely these key races will be rescheduled, possibly as part of the New Year’s Day card.

They are unlikely to be run on Trials Day given the cross-country from the November meeting has already been moved to that day.  That particular race was moved because November had been unseasonably warm and dry and the ground was too hard, a contrast to just one month later when the ground was instead frozen. Weather resilience is something that Cheltenham need to address as climate change brings more extreme conditions.

Doncaster has also abandoned it’s Saturday meeting and Punchestown has been called off on Sunday. ITV racing will now cover 5 races from Newcastle.