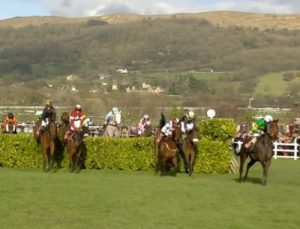 Last month the Cross-Country Chase at the Cheltenham November Meeting was moved at late notice to the Trials Day meeting In January.  This was due to a lack of rain at the course and unseasonable warm and dry weather that caused the ground to become too firm on the cross-country course.  The risk of injury to horses during the gruelling 32 fence race over nearly 4 miles was too great leading to its postponement.

Now, less than a month later we have seen the Cross-Country Chase, due to be held on the Friday at the International Meeting, cancelled.  This time it is is not too warm, rather it is the opposite, it is far too cold.  An unseasonable Artic blast has led to widespread frost across the country.

Cheltenham racecourse are able to cover the New course, where all of the other hurdle and chase races are held, to protect against frost but the cross-country course is simply too big to do the same – especially given only one race is held on it.  Even without frost on the course the ground would likely be too firm in any case to run horses on it.

The cancelled cross-country chase is the final leg in the Crystal Cup European Cross Country Challenge, a series of 11 races across the continent that also includes the Cross-Country Chase at the Cheltenham Festival in March.  It is unknown at this time if the race will be scrapped his year or moved to another course, or perhaps tagged onto the New Year’s Day meeting at Cheltenham.

It is unlikely to be run during Trials Day due to the fact the November Cross-Country has already been moved to that single day meeting and it would be hard to repair the fences between races if two are held on the course.

It is the latest in a series of disruptions Cheltenham racecourse has faced in recent years as it adapts to more extreme weather conditions caused by climate change.

Luckily for Cheltenham the course dried up enough before the Festival in 2021 but it highlights how susceptible Cheltenham is to the weather.  With two cross-country chases cancelled already this year the course will need to start finding ways to adapt in the future as autumn and winter is likely to bring both extreme wet and dry weather and you can never know which to prepare for.