There are many Gold Cups in horse racing, but the most famous is unquestionably the Gold Cup that takes place at the Cheltenham Festival every year. What not many people may realise, however, is that the Gold Cup that is presented to the race’s winner every twelve months isn’t actually the same trophy that was originally given over to the victor when the race was first run back in 1924.

The exciting news for those competing in the Gold Cup in 2019 is that that original trophy has now been returned to the racecourse for the first time since the 1970s and will be presented to the winners at the conclusion of the race next March. The winner of the inaugural race was also given a prize of 100 guineas, though it’s far to say that the prize money is slightly more impressive nowadays.

The first trophy presented to the winner of the inaugural 1924 running of the Gold Cup was created by S Blanckensee & Son Ltd and commissioned by Simmons of Chesterfield. It is nine-carat gold and weighs 644 grams. When it was won for the first time it was handed to the owner of the race’s winner, Red Splash, a Major Humphrey Wyndham. The horse had been ridden by Dick Rees and trained by Fred Withington.

A number of much-loved horses won the trophy in the years that followed, with Easter Hero becoming the first to retain it in 1930. Golden Miller is perhaps the best-known of the victorious horses, winning the trophy five times back-to-back between 1932 and 1936.

The main horses to rival Golden Miller in terms of public recognition as a Gold Cup winner is Cottage Rake, who won the race three times between 1948 and 1950 under the Irish trainer Vincent O’Brien. The success of Arkle, another hat-trick winner, in the 1960s allowed the competition to reach new heights and new audiences; not least of all because it began to be televised for the first time. 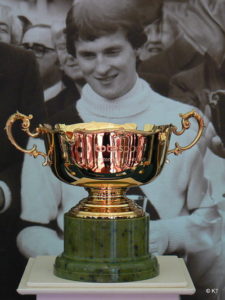 Exactly where the trophy has been since 1972 is unknown, though it is believed to have gone into private ownership and remained there for much of that time. What can be declared with certainty is that a new version of the Gold Cup was created for the 1972 running of the race and that design had been being used ever since.

Rather than keep the 1972 version at the racecourse, the winning owner has been presented with the trophy each year and a new one has been minted for the following year’s race. It contained around ten ounces of gold, meaning that its worth was considered to be around £8,500. 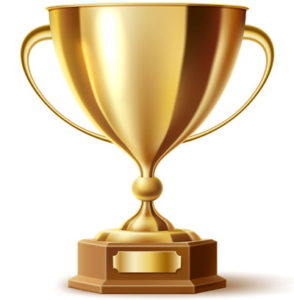 Now that the trophy has been returned to the racecourse by the private owner who had been keeping it in a bank vault since the 1970s, Cheltenham Festival organisers have had to decide what to do with it. The original trophy is going to be played with eighteen-caret gold in order to enhance its appearance before being mounted on a new plinth.

The plinth that the trophy is to be mounted on will feature the name of each and every horse that has ever won the Gold Cup, meaning that it will be engraved with some of the best horses ever to take part in the sport. The Regional Director of the Jockey Club Ian Renton, who is responsible for the running of Cheltenham Racecourse, called it a ‘beautiful, decorative trophy’ and said, “To bring the first ever Cheltenham Gold Cup trophy back to its rightful home and to use is as the perpetual trophy moving forwards really demonstrates the rich history and heritage of the Cheltenham Gold Cup”.

After the trophy has been presented to the winners on the day of the Gold Cup, it will be returned to the racecourse and the winning owner will instead be given a replica of it that is then theirs to keep. Jason Ash, speaking on behalf of the race’s new principle sponsor Magners, said, “We have no doubt that the history, heritage and prestige of this great race will be enhanced through the re-introduction of this beautiful cup as originally presented back in 1924”.