When is it ‘too soon’ to begin getting excited about the Cheltenham Festival? We’re talking about the most thrilling day of Jump Racing in the calendar here, so at what point are we allowed to start looking at the horses that might be running?

Questions will likely be asked in the immediate aftermath of the Gold Cup, with punters wondering which horses that have performed well during the week might step up to the plate for the big one the following year. Yet that probably is a little bit too soon, if we’re being honest. More likely we’re better off waiting until at least after the November Meeting. That’s the point that the Flat Racing season is unofficially over in most people’s mind, so it’s only right that I begin my consideration of what the National Hunt horses are likely to offer in the coming months. 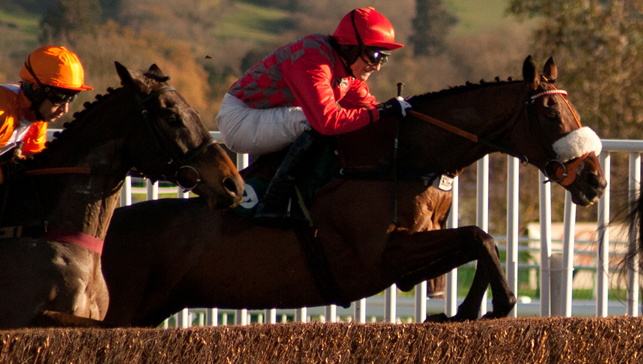 Once the New Year’s Day racing at Cheltenham Racecourse is out of the way it feels as though every jump meeting that takes place is really just gearing us up for the Festival. January also plays host to Festival Trials Day, for example, which couldn’t be more about the build-up to the big event if it wanted to be.

One thing’s for sure, if November is still too soon to be thinking about the Big Five races at the following year’s Festival then January definitely isn’t. After all, it’s only a couple of months until we hear the Cheltenham Roar, get a pint of Guinness in our hand and wander up to see how the Supreme Novices’ Hurdle is going. The inauguration of this new blog, therefore, is all about getting us into the mood for the most thrilling week in the racing year.

First things first then, which horses are the ante-post favourites for the Big Five at the time of writing? What are the bookies saying about their chances?

The prices will change as we get closer to the event and start to hear more about the way that each of the horses has been preparing for the various races, but this is as good a place as any to get started and take the temperature of the industry.

I could pretend that there was some disagreement amongst the bookies about which horse is going to win this one, but what would be the point? The extent to which Buveur Dair is the overwhelming favourite with every single bookmaker that I’ve looked at is truly remarkable. The Nicky Henderson trained gelding started last year’s Champion Hurdle with odds of 5/1, but punters aren’t going to be quite so lucky this time around.

The most generous ante-post price that I’ve been able to find is 8/15 with BetBright. The majority of the other bookies are closer to 4/7. Little wonder, of course, given that JP McManus’s horse has won at Aintree, Newcastle and Kempton since that Festival win last year.

If you’re looking for a cheeky outside bet that could cause the bookies a bit of an upset then it might be worth considering Faugheen. The 2015 winner is a few years older and a whole lot wiser now, having racked up a few more wins under the guidance of both Ruby Walsh and Paul Townend over the intervening three years.

There’s another firm favourite with the bookies when it comes to the Queen Mother Champion Chase. Altior had won nine races in succession when he was entered for the Arkle Challenge Trophy, which he went on to win by six lengths. If you’re wondering why he’s such a clear favourite as far as bookmakers are concerned then you only have to look at his last reason of the season at Kempton Park, in which he beat last year’s Champion Chase winner, Special Tiara, by eight lengths.

This is a serious horse, so it’s no surprise to see some bookies go as low as Evens or 4/5 on his chances of picking up another Festival win this time around. The best I’ve seen so far is 5/4, so if you’re keen to get a longer price then your best bet might be to wait until nearer the time and hope that something works in your favour.

The Ryanair Chase, often known as the Festival Trophy, has only been taking place since 2005. As a consequence only one horse, Albertas Run, has won this race more than once. Five trainers have picked up two wins of it during their career and one jockey in particular stands out from the crowd – Ruby Walsh. Walsh’s win on Un de Sceaux in 2017 was his second in a row and his fourth in total.

The result of all of that is that there’s no standout favourite this early on. That’s not a bad thing from a punter’s point of view, with Un de Sceaux quietly having a very nice 2017 for those that have been paying attention. He finished second at Punchestown in April and won in Cork in December, meaning that some bettors might fancy him to become only the second horse to win the Chase more than once.

Is a race like the Stayer’s Hurdle about form? Or is more about a horse’s ability to run and keep running despite the hardship of the course and the opposition around it? Certainly previous winners have earned a reputation as horses to be wary of, such as Thistlecrack who would have been the favourite for last year’s Gold Cup if not for a tendon injury suffered in February.

The good news for us is that the bookies are completely torn regarding the horse they think is the favourite for this year’s Stayers Hurdle. Sam Spinner can be found for as low as 4/1 with the likes of BetVictor, but Paddy Power have Apples Jade at 3/1 at the time of writing. That means that there’s plenty of decent prices to be found if you look at the ante-post market for one of the most fiercely contested races of the week. 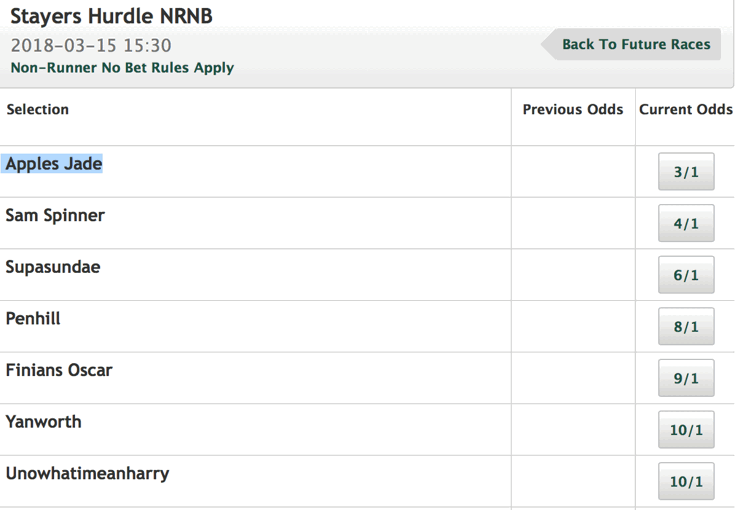 Big Buck’s is the undisputed champion of this one, having picked up four consecutive victories from 2009 to 2012. That shows that a well trained horse with the right jockey can cause problems for its competitors. The right jockey in this case is that man Ruby Walsh again, adding a victory on Nichols Canyon last year to the four he managed with Big Buck’s. It’ll be interesting, therefore, to see who can persuade Walsh to ride their horse this time around.

The leading trainer of this race is Paul Nicholls, but that’s slightly misleading as all four of his wins came courtesy of the race’s all-time winner. The winning horse over the past five years has been shared around between the jockeys and the trainers, meaning that this one really could be anybody’s. That’s reflected in the bookies’s odds, with Sam Spinner having won four of the five races he entered in 2017 and finishing second in the other. An Each-Way bet wouldn’t be outrageous there.

He hasn’t won at Cheltenham, however, so Apple’s Jade might just have the edge after he beat sixteen other horses to the OLBG Mares’ Hurdle at the Festival last year. He also finished second in won race in 2017 and won the rest, entering six in total. It might be worth waiting to see who Walsh decides to ride before going big here, but Each-Way bets on both of them whilst the odds are long might pay dividends if they come in later on.

I’ve told you about the rest so now let’s have a look at the best. The Gold Cup is the premium race of the Cheltenham Festival and one of the biggest races of the National Hunt calendar. Only the Grand National comes close in terms of a race that captures the public’s imagination, so it’s little surprise that the bookmakers are at least leaning towards last year’s winner when it comes to the odds for this race. Sizing John is currently the second favourite at around 5/1, though you can get as long as 6/1 if you do a bit of shopping around.

If you fancy a bit of an outside punt then it might be worth having a look Road To Respect. The gelding won the Leopardstown Christmas Chase, which was Sizing John’s last outing, and is currently sitting at 11/1 with BetBright and others. He also had a decent enough 2017, including earning his Festival stripes when he won the Stable Plate Handicap Chase in a field featuring twenty-three other horses. 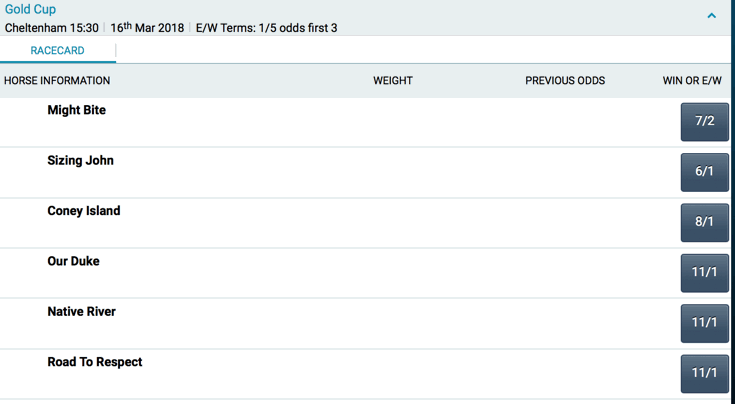 For the bookies, though, the slight edge is going to Might Bite. The eight-year-old came through 2017 undefeated, including picking up a win in the RSA Novices’ Chase at last year’s Festival. The Nicky Henderson trained gelding was ridden by Nico de Boinville throughout the year, with his last defeat coming when Daryl Jacob was in the saddle instead. This might be another one where you have to wait to see who’s going to be the jockey before making any firm decisions, though a 3/1 punt now wouldn’t be a bad idea.

The most successful jockeys, horses and trainers in terms of the Gold Cup have long since retired or died, so there’s not much to learn on that front. In fact, you’ll need to go back to Barry Geraghty’s win on the Nicky Henderson trained Bobs Worth to find a horse, jockey or trainer who had won the event before. The last four winning jockeys, trainers and horses were all first-timers when it came to the Gold Cup. Does that tell us anything? Probably not, but it means that this is a genuinely open field.

One other thing that you might be interested in, especially consider the topic of this post, is the news that big bookies such as William Hill and Betfair have already decided to go Non-Runner No Bet for ante-post bets on the races that I’ve told you about here.

That means that you can go quite big with your wagers safe in the knowledge that if your selected horse ends up not running then you’ll get your money back.