Even those with only a passing interest in horse racing is still aware of the fact that Cheltenham Racecourse is one of the most important courses in the country. They naturally associate it with the Cheltenham Festival, looking forward to the moment that the ‘Cheltenham Roar’ can be heard from nearby areas of Gloucestershire, signalling the start of the meeting. Those that are a little more invested in the horse racing industry, either through working in it or as experienced bettors, know that it’s used for far more than just the one big meeting a year. None can tell you as much about what is likely to transpire in March than Festival Trials Day, which takes place on the last Saturday of January every year.

Trials Day took place just over a week ago as I write this piece, meaning now is the perfect time to have a look at who the winners and losers from the meeting may well turn out to be. It is, after all, the final chance that horses will get to have a run on the Cheltenham course under competitive conditions, so if they don’t perform as expected they’ll likely see their prices shift with bookmakers up and down the land. If they over-perform, of course, then their prices will fall and that’s something that we as punters should be well aware of. There’s still plenty of time for you to get your ante-post bets in, but is there anything that you’ll want to bear in mind after Trials Day? I’ve had a look.

First things first, here’s a quick look at the horses that finished in the top three places for each race on Trials Day, as well as their jockey and trainer:

Before we look at the horse’s themselves, it’s interesting to note the jockeys and trainers that enjoyed some success on Trials Day. Starting with the jockeys, then, Barry Geraghty will be pleased enough with his win and third-place finishes. Similarly, Tom Scudamore’s two second-place finishes and Daryl Jacob’s third and second-place finishes will stand them both in good stead when the Festival proper rolls around.

Wins for Lizzie Kelly and Bryony Frost will spur on those that enjoy having a flutter on female jockeys. When it comes to trainers, meanwhile, Nicky Henderson is no stranger to seeing horses that he’s trained doing well at Cheltenham, but he’ll still have been delighted to watch Santini and the much-favoured Apple’s Shakira performing as expected. Third-place finishes for Colin Tizzard, Nigel Twiston-Davies and Fergal O’Brien will give them a boost ahead of the Festival too.

The reality is that none of the horses that performed well on Trials Day were favourites for any of the big five races during the Festival itself. It’s difficult to tell, therefore, whether the odds have shifted because of their success over the most recent meeting at Cheltenham or just because markets move the closer to an event we get.

That said, the jockeys and trainers have performed well and bookies will use that information to move odds accordingly. Here’s a quick look at where the big races stand now:

When I wrote a blog looking at the favourites for the big five races of the Cheltenham Festival, the top three horses for the Champion Hurdle were Buveur D’Air at 8/15, Faugheen at 5/1 and Melon at 7/1. Now with Ladbrokes there’s been a bit of a shift:

Buveur D’Air is still the runaway favourite, but the price has gone out to 2/5. Faugheen remains the second-favourite but has moved to 6/1, whilst Melon is as long as 12/1. My Tent Or Yours and Yorkhill have actually moved in front of Melon at 10/1, so there’s some real value to be found there.

When it comes to the Queen Mother Champion Chase, there’s been no movement whatsoever as far as the favourite is concerned for William Hill. Altior was 5/4 before Trials Day and remains at the same price now. There’s been a shift everywhere else, though, including Douvan coming out of nowhere to become the joint-third favourite.

Politologue remains in the running but has shifted from 3/1 to 4/1, with Yorkill now having been removed from the options altogether. That’s because it will be running in the Champion Hurdle and that acts as a cautionary tale over ante-post betting. As I told you in that blog post from last month, you always run the risk that you might lose your stake altogether if your horse ends up running in a different race from the one you placed a bet on it for. Hopefully you read the follow-up post and managed to take advantage of a bookmaker offering Non-Runner, No Bet deals.

Sticking with William Hill for a minute, the bookmaker had Un De Sceaux as the 4/1 favourite for the Ryanair Chase last month. The odds there have moved to 3/1, with Un De Sceaux not the only horse that’s name you’ll recognise from looking at the Queen Mother Champion Chase.

Fox Norton and Douvan and both being offered for the two different races, with trainers not yet convinced that they know which race they’ll stand the best chance in. The former horse remains at 11/2, with Top Notch also staying strong as a 5/1 second-favourite. Min has moved from 8/1 to 6/1.

Paddy Power have a handy feature on their site to tell you exactly how much odds have moved around in various races, just in case you can’t remember what they were before or didn’t read my blog post in the first place. Apples Jade was 3/1 when I wrote the piece at the start of January but has since dropped down to 11/4. Supasundae, meanwhile, was 6/1 and is now 3/1, having briefly been 7/2. 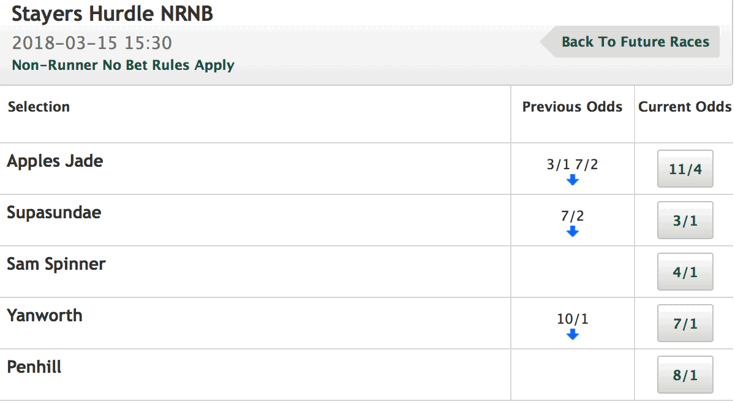 It’s intriguing to see that Sam Spinner’s odds remain the same as they were last month, but they’re now third-favourite and were second before. Yanworth’s movement is one of the most dramatic, shortening from 10/1 to 7/1, whilst Penhill was 8/1 and remains so now.

The biggest race of the Festival attracts the most interest from bettors, which might explain why the odds are tightening up a little bit on the favourites for this one. Might Bite was 7/2 when I looked at BetBright’s odds a few weeks ago, so the 10/3 available now might be worth jumping on before it comes in any further. Sizing John was 6/1 and has shifted to 7/1, with Coney Island remaining as the 8/1 third-favourite. 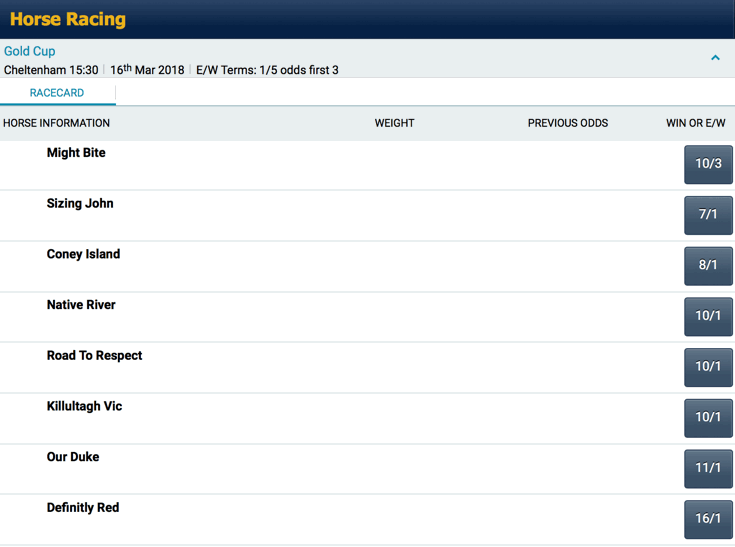 One think that is interesting to note is the 16/1 odds available for Definitely Red. The Cotswold Chase is often seen as an indicator for a horse’s ability to do well in both the Gold Cup and the Grand National, though it’s normally not until the following year. Still, 16/1 is a decent price for a horse that has won a tricky race under pressured conditions just a month and a half before the Festival is due to get underway.