The Countryside Day of The November Meeting at Cheltenham is a friendly, exciting meeting, with the atmosphere is enhanced by the casual dress code and friendly clientele.

Cheltenham Racecourse is an accessible venue where you can find some of the biggest races of the year and with your choice of bookies, bars and burgers as well as fantastic views of the finish line it provides the ideal place to spend a day enjoying the thrill of horse racing.

Getting Into Cheltenham Racecourse

If you decide to drive in to get there for the first race when it is busy you might be waiting for 15-30 mins to get into the car park and find a space. The racecourse is 3miles from Cheltenham Spa train station, which will take 10 mins in a taxi and shuttle buses are also available.

There were only four helicopters parked at the helipad on the day we went with plenty of extra spaces if this is your transportation of choice.

We were dropped off near the car park entrance in order to skip the traffic jam into the car park.

There was no queue to get past bag checks and ticket inspection. Tickets can be bought on the day from the ticket offices at the main entrances and there were very short queues for these.

Once inside, it was immediately noticeable, from the race goers’ attire, that this was a casual countryside day, the stated dress code suggested that fancy dress was welcome, with the caveat that it isn’t offensive, but I didn’t see any.

Some of the regulars, with their green badges proudly displayed were dressed in smart suites of wool or tweed but the majority of punters wore smart casual clothes, jeans and jackets, shirts and dresses. Flat caps and something fancier for the ladies were clearly acceptable. 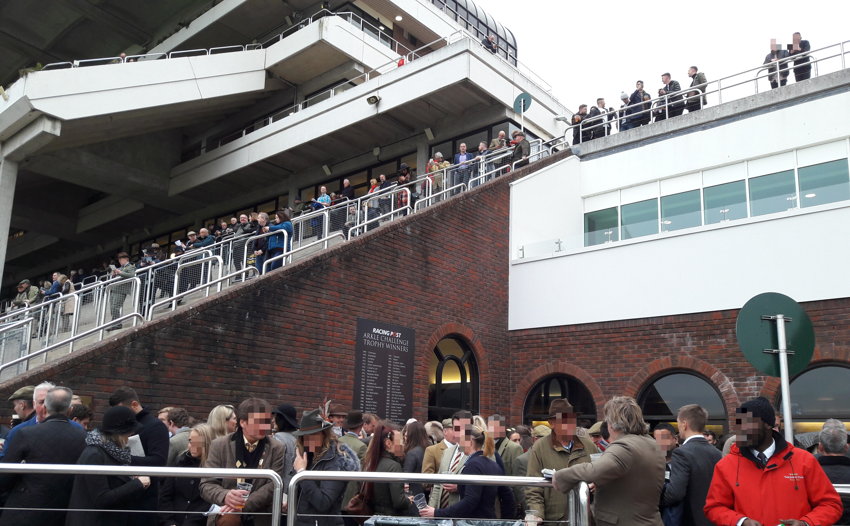 As we walked in, between the SUVs and BMWs, we could see the more social and enterprising regulars to this event had gathered around their open car boots to celebrate the beginning of this popular 3-day event.

Cheese, scotch, champagne, tweed and pheasant feathers were the order of the day for these car park socials which lent an air of frivolity to the entrance to Cheltenham Racecourse.

The bustle of the day was metered by the course’s large capacity. Cheltenham is a huge venue with a capacity for 67,500 spectators and today’s meeting was around one third full with 22,500 spectators.

The atmosphere was friendly throughout the course, the stewards were evident and very helpful. There are some areas of the course, including the main stands where alcohol isn’t permitted and there’s always a happy face at the doorway to remind you of this, just in case you’ve already had a few and forgotten.

There were 4 main bars open to the public at Cheltenham racecourse and they were all full and bustling. 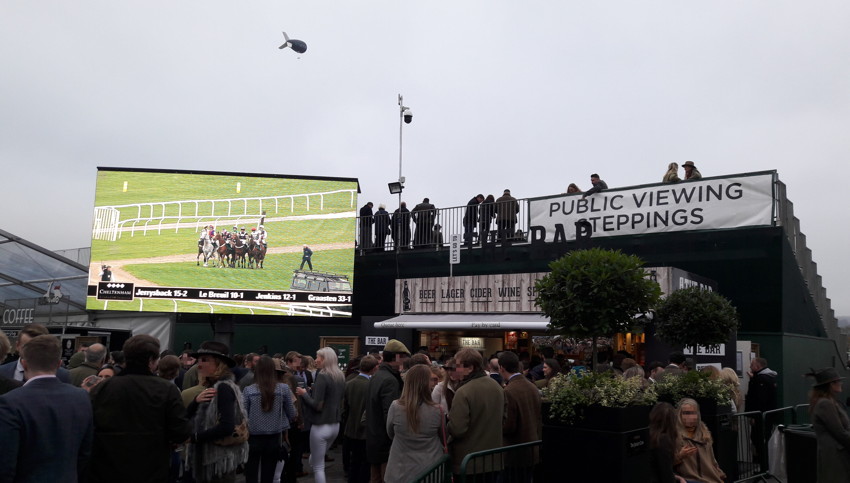 There are different areas dedicated to the bar of your choice (and budget). We spent most of our times in the Vestey bar, from here we had a good view of a screen, large screens are spread throughout the venue so that you are never far from a view of the race.

The Vestey bar also has a balcony from which we could see the approach to the finish line (whilst outside) in an area where you can both drink and smoke (if that’s your thing). The bar staff were on form and we didn’t have to wait long for our drinks. The range of beers and ciders is limited, and all come in plastic cups in the areas we frequented (you might get something nicer in the Champagne bars).

After a few beers and a few races there’s no doubt you’ll need to relieve yourself, good news, the toilets are accessible well signposted and clean so no worries there. 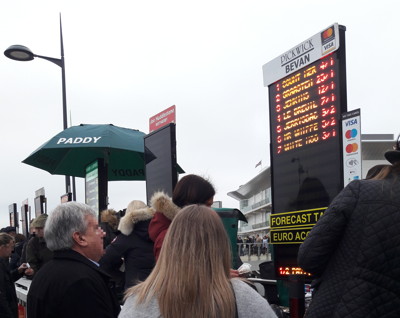 Whilst the beer and bants are great let us not forget what we’ve come for! That’s the racing and the betting, there’s still nothing as warming as cheering from the rails as your long shot wins by a head on a chilly winter day.

We arrived shortly before the first race and with no time to settle in for a pint and a good view we headed for the bookies. At Cheltenham Racecourse there is plenty of choice. There are numerous rows of bookies with their latest odds regularly updating on their bright vidi printers.

Most of them are cash only and your options are simple on the nose or each way bets at the displayed prices. Compare the different prices along the row of different bookies, some will be better. The smaller companies are there competing with Ladbrokes and some of the bigger names.

If you want to place a more complex bet, such as an accumulator or you prefer the atmosphere and betting structure of a bookies then you can make your way to the on-site William Hill which has the layout, coupons and betting slips you’d expect from any high street bookmaker. They also have screens showing the results in other races and football so that you have the chance to bet on other events during the day.

As well as the bookies stands and the high street bookies you will also find a lot of Tote stands doted around the venue. Here you can place bets a range of bets at good prices and with minimal queues.

The Countryside Day of The November Meeting (formerly known as the Cheltenham Open) has 6 races, including 2 Hurdles and 4 Chase races. The going was good, good to soft and the weather was overcast but balmy for the 16th of November.

The first race of the day, at 12.40, was the Markel Insurance Amateur Riders Handicap Steeple Chase and the bookies favourites were the two Masters, The Young Master and Station Master. The odds-on Station Master were shorter and with 11 horses in the race I decided I’d put my money on him to maximise my chances of getting a feel good win at the start.

This is when disaster struck for me, my hand had reached for my pocket searching for the familiar feel of my leather card holder… where was it? I’d had it that morning when I was putting my car keys back into my overnight bag and that’s where it was. After spending 5 minutes kicking myself for being such an idiot that I’d come to the races without any cards or cash I remembered my phone was set up to use Google Pay. Surely, I’d find someone around that would accept a debit card, via google pay for wager on Station Master.

Tote and most of the bookies wouldn’t take my phone-based debit card, then, just in the nick of time I found Barry R Johnson Ltd Bookmakers on the main concourse, one of the few outfits set up to take apple pay google pay and debit cards. My luck was in. I got my bet in just before the race started. I watched it on the big screen on the main concourse, the atmosphere here wasn’t great, I could hear the cheers from the bar as Station Master closed on The Young Master, but he ultimately came finished in second place. A disappointing start but at least I had somewhere to place a bet.

After my frantic start I caught up with my friends in the Vestey bar for a few beers before the 1.15 Fairlight Book Novices Handicap, thankfully the bar also accepted GooglePay so I didn’t have to shirk my rounds. 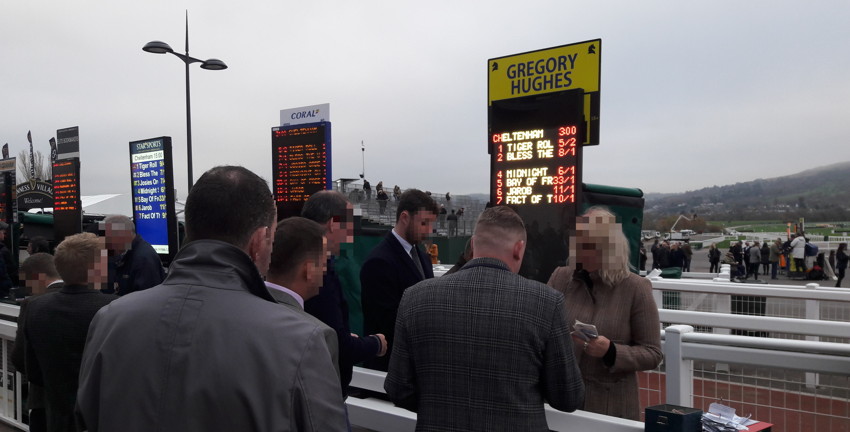 The second race at 1.15, the catchily entitled Swanee River Supports Countryside Alliance Novices Handicap Hurdle was a 2m Hurdles. Again, I went with the favourite, £10 on the nose at my now favourite bookies. We got out into the stands for this race to be with the crowds who were very animated as the horses came into the final furlong. The shouts for My Brother drowning out the sounds of the horse’s hooves as they thundered to the finish, with Red Hot Chilly, a 33/1 outsider winning the race. Disappointment all around my group of friends so back to the bar for a few more beers.

The third race at 1.50 was the Bet Victor Handicap Chase and at last I bet on the winner Bun Doran. £20 on the nose got me enough back to continue betting and drinking for the rest of the day without having to worry about how I was going to pay!

There were no winners for me or my friends in the final three races. Tiger Roll, the Grand National winner, was a particular disappointment when placing in fourth in the Glenfarclas Cross Country Handicap Steeple Chase. Despite the disappointing outcome this was the most exciting race of the day with the majority of the crowd getting behind Tiger Roll who was doing well until the final few fences. Races like these, with the whole, animated crowd shouting for their horse is when the race day really comes alive and whether you win or lose you feel like you’ve been a part of a special event.

We watched the remaining races from the comfort of the Vestey bar before leaving just after the final race, we headed into town and the route out was quick and not too crowded, we quickly found a relatively quiet pub and so our day continued.

The account above was written by a racegoer who kindly documented their experience and shared it here.