When you think about horse racing, the order of importance for most people will go horse first, then trainer and finally jockey. Most people don’t even consider the relevance of the owner, unless they’re properly invested in the world of horse racing and everything that it entails. The trainer has a crucial role, which is why they have their own award at the end of Cheltenham week.

The jockey is the person that steers the horse around the course in the various races, however. It’s little wonder, then, that trainers work so hard to get the best jockeys to sign up to work with their yards. Elsewhere on the site you’ll be able to read about the Cheltenham Festival’s most successful owners and trainers, but this page is dedicated to the jockeys that have won most often. 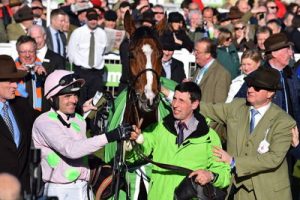 Though female jockeys have become more and more accepted in the industry in recent years, they are still not quite given the same faith from trainers and owners as their male counterparts. So it is that the list of the top 5 jockeys at the Cheltenham Festival is an entirely male affair. Hopefully that’s something that will have changed in ten years time.

We should also make clear that we haven’t given this list any specific weighing. A jockey that has won the Gold Cup five times and no other races at the Festival will clearly be held in higher regard than one that has won thirty of the meeting’s more minor races. For us, though, we just care about the numbers. How many races a jockey has won dictates their place on our list.

The table above shows the jockeys we’ll be looking at in more detail. That’s the list that we’re working with and, although we’ve opted to confirm their Cheltenham Gold Cup wins in the table, it’s fair to say that each of them has enjoyed far more success than just winning that race over the years. Here we’ll take a closer look at their careers to date.

Where else to start but with Rupert ‘Ruby’ Walsh, who was born in County Kildare on the 14th of May 1979? He is far and away the best jockey that the Cheltenham Festival has ever seen, winning 59 races during his career. That included Gold Cup wins in both 2007 and 2008 as well as winning the Leading Jockey Award 11 times.

In many ways he was always destined to be one of the Fesitval’s great riders, considering that he won the Irish Amateur Title as a teenager and the Irish love winning at Cheltenham. He was also just 20-years-old when he won the Grand National in 2000, showing that he wasn’t over-awed by the biggest races in the jump racing world.

Walsh’s first win at the Festival came in 1998 on the back of Alexander Banquet. He was still an amateur rider at the time, winning the Champion Bumper on him. Remarkably, he finished every single Festival he took part in from 2002 onwards with at least one winner, showing just how prolific he was. He finished his career with at least one win in the following races to his name:

Born on the 16th of September in 1979 in County Meath Ireland, Barry Geraghty is probably the only person likely to catch Ruby Walsh, though even he’d admit it’s a long-shot at best. At the time of writing he has 43 Cheltenham Festival wins to his name, including 2 Gold Cups. His first winner at the Cheltenham Festival came on the back of Moscow Flyer in 2002.

That was in the Arkle Chase, which was the same horse that he won the Queen Mother Champion Chase on the following year. 2003 Was a big one for Geraghty, not only because of the four other winners he managed at the Festival but because of his victory in the Grand National at Aintree. His relationship with Moscow Flyer continued, winning the Champion Chase again in 2005.

His love affair with Cheltenham was only just begging, though. If the 2005 Gold Cup hadn’t been enough to cement his enjoyment of the meeting then his win in the Champion Hurdle of 2009 surely was. It meant he was the first jockey to win the Champion Hurdle, Champion Chase, Stayers Hurdle and Gold Cup at the Festival as well as the Grand National.

He has won virtually every race there is to win at Cheltenham, including several Arkle’s, a number of Triumph Hurdles and, of course, those two Gold Cups. It’s not exactly a surprise, therefore, that he is a favourite of attendees to the Gloucestershire event. His 2003 win in the Grand National on the back of Monty’s Pass means he’ll always be considered one of racing’s best jockeys.  Barry retired in 2020.

For a time, Sir Anthony McCoy was considered to be one the best jockeys ever to take part in British and Irish racing. Born in County Antrim, Northern Ireland, in May of 1974, his career took in more than 4,000 winners over jumps as well as 10 over the flat. He won every single major race that there was to win, including most of the big ones at Prestbury Park.

AP McCoy’s first season in 1994-1995 saw him on the back of 74 winners, which was the lowest number he ever rode in a full season. By the time the millennium rolled around, he had set a new record for winners in a National Hunt season, working with Martin Pipe to land 253 victories. In 1998 he even equalled the record for most Cheltenham winners in a year, which was 5.

2002 saw McCoy beat the record for most winners in a season when he finished up with 289 victories; something that he later claimed was his finest ever achievement. That includes winning the Gold Cup twice as well as wins in the likes of the Champion Hurdle and the Queen Mother Champion Chase, ticking all of the Festivals big race boxes.

For many, his Gold Cup win on Synchronised in 2012 was the perfect microcosm of his career. He outpaced in the first half of the race, looking like it was going to be beyond him. He rallied well in the second half, however, and ultimately looked like the horse could keep on running as it passed former Gold Cup winner Long Run to hand him his second title in the blue riband event.

If the races were given some sort of weighting then there’d be little doubt that Pat Taafe would find himself closer to the top of this list. He won the Gold Cup at Cheltenham three times between 1964 and 1966, all of those wins coming on the back of the much-loved Arkle. It was enough to earn a place in Prestbury Park folklore for both him and the horse.

He would later go on to win the Gold Cup as a trainer too, when Bobby Beasley managed it with Captain Christy in 1974. Born in Dublin in 1930, Taafe didn’t need to be on the back of Arkle to win important races. Yes, the pair of them dominated National Hunt racing in the 1960s, but Taafe also won the Gold Cup in 1968 with Fort Leney.

He might well have won even more Cheltenham races had he not chosen to retire in 1970. His victory as a trainer might have suggested a move into that sphere of the industry, but he didn’t have a brain for the business side of things and training wasn’t something that he was able to truly spread his wings in the same way as he’d managed as a jockey.

In 1989 he became just the third person in Ireland to undergo a heart transplant. It was hoped that this would give him a new lease of life but instead he died three years later in his native Dublin. He might not have managed to add as many victories to his Cheltenham tally as he would have liked, but thanks to his work with Arkle he’ll always be remembered as one of the greats.

Most jockeys spent their career dreaming of a Gold Cup win, so Pat Taafe may well never be caught thanks to his four wins in the race. Davy Russell certainly won’t feel any shame that he’s ‘only’ managed to win it once at the time of writing. Russell was born in County Cork in June of 1979, riding for four years as an amateur in point-to-point races.

He moved to England in 2002 and became a professional, winning his first race in November. The following year he won the Peter Marsh Chase on Truckers Tavern, the horse with which he finished second in the Cheltenham Gold Cup in the same year. It’s possible that that spurred a love for the meeting in the Irishman, though it took him three years to get his first Festival winner.

That came on the back of Native Jack in the Cross Country Chase, but once he’d got a winner he struggled to stop. He’s managed to ride to victory in at least one race at the Cheltenham Festival ever since, culminating in a Gold Cup win on Lord Windermere in 2014. Four years later and he managed to claim his first Leading Jockey award at Prestbury Park.

Aside from the Gold Cup, Russell’s major wins at the Festival include 3 Ballymore Novice Hurdles, 2 JLT Novices’ Chases, 3 RSA Insurance Novices’ Chases and a single win in both the Ryanair Chase, the Johnny Henderson Grand Annual Chase and the Triumph Hurdle. His win in the last of those races came on Tiger Roll, the horse he won back-to-back Grand Nationals with.