Backing the favourite in a horse race is a perilous game, on the one hand a favourite is fancied for a reason, because most people think it will win, but on the other hand the shorter odds you get on favourites mean that you generally need to back them to win with a decent stake and if you are wrong it can hit your pocket.

The Cheltenham Festival adds a degree of complexity to picking races to back favourites, simply because for most of the races all the horses are previous winners and many have been favourites at some point.  In some ways you at Cheltenham you are looking at the favourite, favourite.

As a rule of thumb favourites win around 30% of races or 3 in 10.  This, of course, is a general statistic taken from 1000’s of races and doesn’t consider the factors that affect individual races.  Therefore, here we show you the percentage favourites that win in all 28 Cheltenham Festival races to help you find the right races to back the favourites in and the right races to look for longer odds outsiders.

The data above shows the percentage of favourites that have won each race at Cheltenham since the year 2000, or since the race was first run. We also show the average odds for each race.  We have chosen to restrict this to races run in this century so the data is more reflective of what you will see in a Festival race today.  Some races go back to the mid-1800’s and looking at races 100 years ago is often not relevant today.

Before discussing the individual races one thing that immediately jumps out is the variation in the percentage favourites that win.  We are going to exclude the Mrs Paddy Power Chase for now as this was only established in 2021 and therefore does not yet have sufficient representative data.

Earlier we said that favourites win around 30% of races and that corresponds with the median value in the table above, 28% (median is the middle value).  Also looking at the the average of averages, excluding the Mrs Paddy Power Chase, this works out at 29%. This means that the Festival is broadly in line with the general stats on favourites winning in horse racing.

The Close Brothers Mares’ Hurdle has seen the favourite win the most, with 53% of races since won by the shortest-odds horse since it was founded in 2008, while the Martin Pipe Handicap Hurdle, established in 2009, has seen just 7% of favourites win.

Therefore, picking the right races to back favourites in or to pick longer odds outsiders is crucial when choosing your Cheltenham wagers. 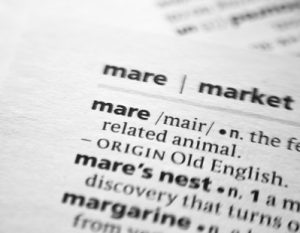 There are currently three races restricted to mare’s at the Festival and interestingly two of them take the first and second spot in the table.  The other race, the Mrs Paddy Power Chase, has not been running long enough to evaluate yet.

Therefore, backing the favourite girls could be a good option. The Close Brothers Mares’ Hurdle happens to also be the race with the lowest average odds for the winner, which makes sense (read more about that on our average odds for Cheltenham Festival winners page).  However, that is thanks in large part to the fact Willie Mullins and Ruby Walsh have won most of the races since it started and Quevega won 6 of the first 7 races in a row.

Grade 1 Races Dominate The Top Half 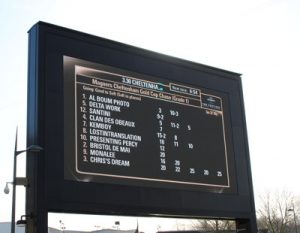 Only one of the first 11 races in the table is not a grade 1 race, that is the Dawn Run Mares’ Novices’ Hurdle, which is a grade 2 affair.  All of the big four championship races (Champion Hurdle, Champion Chase, Stayer’s Hurdle and Gold Cup) along with the 5th biggest race, the Ryanair Chase, are in the top 10.

That may sound logical on the face of it, the best of the best horses compete in these races and these are the ones we may expect to win more often.  That doesn’t, however, reflect the quality of the field in these races.  Take the Gold Cup, for example, 45% of Gold Cup races are won by the favourite, yet, in any given year there are 4 or 5 runners that could easily win the Gold Cup.  All the runners in these races have won high profile races before and so it is not a given that the percentage of favourites that win these races should be so high.

While all of the big 5 races have a percentage above 35% this should be taken with some caution based on the fact that favourites are generally short odds, often odds-on.  Therefore, if you backed the favourite every year in these races you may not end up with a profit at the end of it all.

It is not a surprise to see that it is the more open bigger field handicaps that also see the lowest percentage of favourites win.  Handicaps by design weight horses to try to create a level playing field, thereby reducing the advantage for any favourite, who is more likely to be carrying a higher weight.

To support that idea there is only one race higher than grade 3 in the bottom 10 (excluding the Mrs Paddy Power Chase) and that is a special race in itself as it is a flat race, the Champion Bumper, grade 1.

The Martin Pipe Handicap Hurdle, Coral Cup and Festival Trophy Handicap Chase all see the favourite in equal to or less than 1 out of 10 races.  That is actually quite low when you consider the Grand National, regarded as a lottery of race by many, has an average favourite win rate of around 15%.

Average Odds Do Not Always Correspond 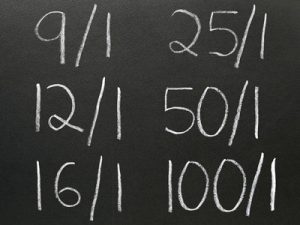 Generally, as you would expect, the races with the lowest average odds for the winners tend to be the races where the favourites win the most.  This isn’t a steadfast rule, though.

The Juvenile Novices’ Hurdle is the race with the highest average winner odds but it is 6th from bottom in the percentage favourites that win, 17%.  Therefore, while favourites win roughly 1 in 5 races the average odds are still 23.17 in decimal (~ 22/1).

Conversely, as mentioned previously, the Dawn Run Mares’ Novices’ Hurdle sees 43% of races won by the favourite but average odds in the middle of the list.  Even the Champion Hurdle, 2nd on the favourites list with 50% has fairly high average winner odds at 8.43 (~15/2).