Every day of the Cheltenham Festival has its own premier race that it builds up to. Day Four is special, for this features the race that only the day itself builds up to, but also the one that the Festival as a whole centres around. Once the Gold Cup is finished there’s a danger than the race which follows it could suffer from ‘after the Lord Mayor’s show’ syndrome. That’s why the Festival organisers have cleverly put the Foxhunter Challenge Cup next on the schedule, to keep the attention of racegoers by offering them something technically identical to the Gold Cup, yet different enough to be interesting. 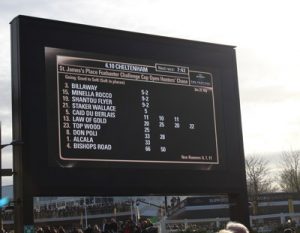 The Foxhunter Challenge Cup is essentially the Gold Cup for amateurs. It is run left-handed over the same distance as the Gold Cup, following the same three mile, two and a half furling route and featuring the same twenty-two fences that must be jumped. The only difference, in fact, is that this is only open for amateur jockeys and the horses that enter it must meet a set criteria in order to qualify. They need to have either won two point-to-point races or have one point-to-point victory alongside a first or second place finish in a hunter chase. If not then they must have come either first or second in two hunter chases.

The horses must be five or older, with five-year-olds given a weight of eleven stone twelve pound and those older than five twelve stone exactly. There’s a seven pounds allowance in place for mares.  The pot for this race is under £45,000, the lowest of any event during that year’s Cheltenham Festival.

The race was first run in 1904, yet records for it only go back as far as 1946. Because it’s a remarkably tricky race to run, essentially following the same circuit as the Gold Cup before it, it’s tricky for a horse to win it several times. In fact, no horse has ever won the race more than twice. The Callant, Whinstone Hill, College Master, Double Silk, Fantus, Earthmover, Salsify, On The Fringe and Pacha du Polder are the nine horses that have managed double victories, with Earthmover’s wins in 1998 and 2004 the most distant from each other.

Where there’s a horse than wins more than once, there’s normally a trainer achieving the same thing. Arthur Stephenson, Bobby Brewis, Dick Woodhouse (riding the horses he’d trained), Laurie Morgan (also riding the horse as well as training it), Reg Wilkins and Roger Sweeney have all notched up double wins, with Stewart Wight, Fred Winter and Enda Bolger all managing to win it three time. The record, though, goes jointly to Richard Barber for his four wins between 1992 and 1998 and Paul Nicholls for his four victories between 2004 and 2018.

Willie Mullins in fact only won this race for the first time in 2022 with Billaway, so maybe look to other horses in general and stick with Mullins for the other races.

Any race that immediately follows the most important race of the day is always likely to suffer in comparison to its forerunner, yet the similarities between the Foxhunter Chase and the Gold Cup are what make this one worth watching. Your average punter might think that the end of the day’s premier event means that the fun is over at Cheltenham for another year, but your more knowledgeable racegoers will know that this race could tell you a lot about the future.

How do the amateur jockeys handle the pressure of riding the ‘mini Gold Cup’? Equally as important, how do the horses handle it? One thing you might want to make note of is the presence of any female jockeys entering the race. The Foxhunter Challenge Cup produced the Cheltenham Festival’s first ever winner when Caroline Beasley rode Eliogarty to victory in 1983, with seven races being won by women since then. That includes 2015 and 2016 victories for Nina Carberry and 2017’s win by Bryony Frost. In the previous 7 years to date the race has been won by a female jockey on five occasions.

Presume a case of ‘after the Lord Mayor’s show’ if you wish, but you’d be wrong to think that this is an unexciting race. Given that eight of the last twelve winners have had a starting price of 14/1 or higher, this could be an opportunity for a canny bettor to win themselves some decent money.