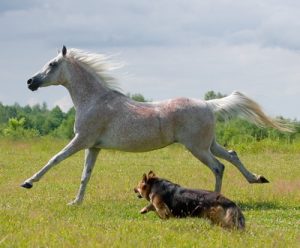 When it comes to betting on racing, there are two main sports that most people look towards: horse racing and greyhounds. Whilst an annual race takes place in Wales to discover who would win if you pitted a man and a horse against each other (it’s virtually always the horse…), another question people that love sports might want to know is who would win between a horse and a greyhound if you put them on a track together.

The natural instinct is to assume that it would be the dog over short distance and the horse over a longer one, presuming that neither animal scares the living daylights out of the other. But is that assumption necessarily fair? Is the fact that a greyhound is built to run over a short distance as quickly as possible enough to mean that it would run out of steam if you asked it to run further and for longer? It’s an interesting question to pose.

Dogs and Horses Are Built Differently

The key to any race is ensuring that the animal that you’ve selected to run in it is built to do well at the discipline in question. This isn’t just true when you’re talking about a potential battle between horses and dogs, but also when you’re looking at the individual sports that those two animals compete in. After all, there’s no point putting a two-year-old flat racing horse up for the Grand National when the Aintree contest rolls around.

Horses are bred for all sorts of different reasons, with the main ones being running on the flat and running over jumps. Even there, though, you’ll find that they’re trained to take on different events. A flat racing horse that has been trained for years to be as quick as possible over six furlongs would struggle if you doubled the length of the race that it was taking part in. That’s especially true when put up against horses specifically trained for mile-long events.

Jump racing differs from event to event, too. A horse that has spent its life jumping over hurdles might be able to take on a steeplechase, but it’s likely to struggle at the first time of asking. Equally, even the most powerful of steeplechase animals might not be able to run on a cross country course because of the different obstacles that it will come up against. Even in dog racing there are different disciplines that greyhounds are asked to take on.

It Depends On The Race 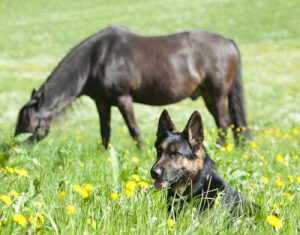 The result of this is that the first thing you’ll need to think about when trying to decide who would win a race between a dog and a horse is what sort of race you’re asking them to compete in. After all, it doesn’t take a genius to work out which animal would win a steeplechase when the fences can stand at 52 inches and a greyhound is about two foot tall at most. It would be a pointless race to run, so instead we’re better off only thinking about flat racing.

Just because we’ve narrowed it down to flat racing doesn’t mean that it’s now a simple matter of putting a dog and a horse on a course and seeing which one will win. The English Greyhound Derby, for example, is run over 500 metres and usually take the winning dog less than thirty seconds to complete the race. Compare that to a six furlong horse race, which is the equivalent of about 1207 metres and will be competed in around 1 minute 12 seconds.

With research suggesting that both horses and dogs have seemingly reached the limit of their running speed, it’s unlikely that a dog or horse would be able to trained to run further at a faster speed than they currently can. As a result, picking a race that would be fair for both would probably be the best way of identifying once and for all which of the two animals is the fastest. The race would need to be a good compromise for each animal’s strength.

It is also worth considering the ground they are running on and the topography.  If running up the side of a steep hill a dog will likely win due to it being smaller and more flexible, a shallow gradient grassy hill would suit a horse more though.  If the ground is very soft and muddy this will suit a horse over a dog as it will be able to get more purchase on the ground and is less likely to get bogged down.

It Has Happened Before 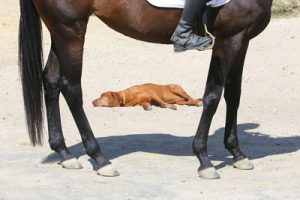 Perhaps somewhat unsurprisingly, this isn’t a question that is brand new. Indeed, many people have asked the question before. As a result, we can actually look back to specific events to see what the outcome was. One such example saw the top staying greyhound Ferry Forth Fran go up against Limerick Lord at Towcester Racecourse, which had both horse racing and greyhound racing tracks for the animals to run on simultaneously.

The reason Towcester was chosen for the race is that the winning post of both tracks was in line with each other, meaning that you could actively see which animal crossed the line first. Ferry Forth Fran was 3-years-old, whilst Limerick Lord was 4. The greyhound ran over a circuit and a half of the flat, left-handed course. Though the greyhound won the race, there’s an argument that it wasn’t totally fair, given that the horse had to run up hill.

The race at Towcester saw the horse miss out by 7/10ths of a second, meaning that you can assume it would have won if it had ridden on a course as flat as the one that the greyhound was running on. A similar race was run at Kempton Park in Middlesex, seeing 8-year-old greyhound Simply Fabulous up against 6-year-old thoroughbred Tiny Tim. The pair raced over two furlongs, which is 400 metres, with bookmakers making the horse an 8/11 favourite.

The dog was put at Evens, having won 14 races over 35 starts. In order to prevent distraction, the horse wore blinkers. It didn’t help, however, with Simply Fabulous winning the race with a time of 23.29 seconds compared to Tiny Tim’s 24.63 seconds. That amounted to a seven horse length, or 15 dog length, win for the greyhound, much to the surprise of the bookmakers, the watching public and even the horse’s jockey.

Who Would Win Between A Horse And A Dog?

Though the greyhounds won both of the races that we’ve specifically looked at here, it’s worth noting that the horse’s jockey, Fergus Sweeney, said that he believed that the horse would have won if the race had taken place over another furlong.

Those that believe horses to have the upper hand might well argue that the circumstances weren’t to the horse’s favour, whilst dog lovers will wonder if the greyhound is the fastest animal on the planet.

Overall the shorter the race the better chance the dog has of winning, especially if from a standing start as a dog can accelerate faster initially.  The longer the race the more the horse comes into it.  If the course has short twisty turns this will suit a dog but if it is made up of longer straights this will suit the horse as dogs can turn faster but don’t have the stride length of a horse to maintain speed on a straight.

This is not surprising given in nature dogs are predators built for short bursts of speed and fast turns to catch prey, which is effectively what they think they are doing chasing a lure in a greyhound race and the sport as a whole has evolved from coursing that involves live prey.  Horses on the other hand are built to run long distances and jump obstacles between pastures to find food and escape predators, meaning stamina and straight line speed is the bigger attribute in the equine world.