Also known as Tic-Tac, Tick-Tack and other variations on a similar theme, Tic Tac is the manual sign language used by on-course bookmakers to communicate the odds. Though something of a dying art nowadays, it was very common in the early days of both dog and horse racing, with the Tic Tac men often seen wearing white gloves in order to ensure that their signs were easy to understand. Bookmakers will have people in different locations around the course who need to communicate with each other quickly and from far away, hence the need to use sign language.

In the modern era, of course, technology such as mobile phones and Wi-Fi means that they can get in touch with each other much more quickly and simply. This, in turn, has seen the use of Tic Tac drop off rather dramatically to the point that it is as good as extinct in many parts of the country. By 1999, just three users of Tic Tac were still in operation on British racecourses, such is the extent that technology has effectively started doing their jobs for them. There is evidence to suggest that Tic Tac was first used in 1888.

What Tic Tac Was Used For

In its most basic form, Tic Tac was used to communicate between bookmakers and their staff. In simple terms, it was a method of ensuring that one bookies’ odds weren’t vastly different from those used by a competitor, which sensible and aware punters would have taken advantage of. For those readers that remember the racing presenter John McCririck, he would use Tic Tac during pieces to camera to explain the odds in a race that he was taking about. That is probably the most modern use of it as a communication method.

Tic Tac was a multi-purpose form of communication, signalling not just the prices of horses and dogs, depending on the stadium it was used in, but also for so much more. The likes of betting moves would be told via Tic Tac, as would who had put on a bet and the money to be put on. A big bet placed with one bookmaker, for example, would be communicated to all of the other bookies in order to allow them to lower the price on their boards. It allowed bookmakers to communicate with each other without the punters finding out.

Tic Tac was a curiously British phenomenon, with racecourses on the continent never really cottoning on to its use. Whilst it is fascinating to see a Tic Tacer communicating via this method, it will seem like complete gibberish to anyone that doesn’t understand what is taking place. It was always information that bettors would love to have, given that the movement of a horse’s odds is valuable if you can get it before the move is actually made. Imagine a horse at 15/1 that is dropping to 7/2 because of a big bet being placed on it, for example.

At places such as Epsom, the use of Tic Tac was important because of the fact that bookmakers could be based ‘on the hill’, whilst others were in the principal rings. It was a distance that was too far to send a runner with a message, so another method of communication needed to be established. Newspaper agencies would also use the communication method to signal the result of races, sending their message from the course to someone in a telephone box who could send it to the tape-machines virtually straight away.

Tic Tac as a method of communication came about in the days when bets could only be placed legally with on-course bookmakers. As a result, huge sums of money would change hands at races such as the Grand National or during Ascot week. A large sum being placed on one horse would be information that other bookies would need to know, mainly so that they could avoid taking a big bet on the same horse themselves. The competitive nature of the betting industry meant that bookies and their Tic Tac men would try to disguise what they were saying.

This would be done by using something like a twist card, which encoded the signals and was something that only the bookie and their layers would understand. The Tic Tacers would stand on boxes by the railings, using the coded instructions to get their message across. When the code became too obvious, they would number the horses irregularly with their bookie so that no one else could understand what it was that they were talking about. Even the bookmakers had their own signals, with William Hill looking like a hill and Ladbrokes being a circular motion above the head.

Interestingly, it wasn’t just hand movements. Tic Tac itself is a combination of cockney rhyming slang and backslang words alongside the hand movements. That is why it was so difficult to learn and virtually impossible for outsiders to interpret. Indeed, if you saw a Tic Tac communique and didn’t know what it was that you were watching, you’d probably just think that the person doing it was opting to attempt some form of interpretive dance. Given that the likes of a hat or a handkerchief could also be used as part of the message, it was very much a confusing way of messaging.

As if to add even more confusion to the matter, different parts of the United Kingdom would have their own variations of the signals. Odds of 6/4 might be represented by a hand touching the opposite elbow in the north, whilst down south it would be a hand touching the opposite ear. Even if someone understood the signals used by Tic Tac operators in Ascot, say, there’s no guarantee that they’d be able to interpret the signals used by those using Tic Tac at Aintree or during the Cheltenham Festival, such was the manner in which it changed from place to place.

Now that we have a reasonably good idea what Tic Tac was when it was at its height, let’s have a look at some of the different hand signals that were used by bookies to communicate with one another. We will also offer the slag that was used by the Tic Tacers and bookmakers. Some of this was cockney rhyming slang, some was backslang, wherein the word would be used backwards, and some of it was simply slang that worked on the course and developed out of the hand signals themselves when necessary. 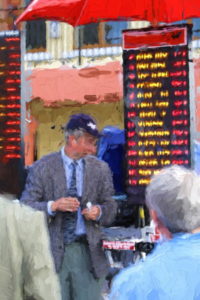 That list isn’t exhaustive, but it gives you a good sense of the sort of movements that were needed for the Tic Tac operatives to communicate odds information to their bookmakers. As mentioned elsewhere in the piece, they would communicate other information such as which bookmakers had taken a bet with large sums of money involved, which is another thing that they would have signs for. It would be virtually impossible to give a list of every single thing communicated via the use of Tic Tac, especially when the likes of regional variations are included.

As an example of some of the other phrases that were used when bookies and their Tic Tacs communicated, Beeswax was the term that meant tax. Jolly would be used to describe a favourite, whilst Kite was the word meaning cheque. Someone who didn’t pay up when owning money was known as a knock, with £25 indicated by the term Pony. That is linked to the Tic Tac by Pony, or its rhyming slang Macaroni, being used for 25/1. £100 is a Ton, whilst £500 is a monkey. £1,000, or a grand, was known as a A Bag Of Sand. Another term is Rock Cake, which is a small bet.

There are a wealth of different terms used, with bookmakers around the country having ones that were peculiar to them. They would represent different aspects of racing, such as when a favourite that wasn’t expected to do very was referred to as a Bismarck, given its likelihood of sinking. A horse that was an outsider in the field would be known as a Rag, whilst a horse that lost a shoe would be said to have ‘Spread A Plate’. Many of these things would mean little to the punters but would mean everything to the bookies.

Given the extent to which money could be made or lost quickly on a racecourse, Tic Tacers were a vital part of the bookmaker’s armour against the punters that were taking them on to win their money. The very use of them seems extremely anachronistic in the modern era of walkie-talkies and mobile phones, to say nothing of online betting, but the truth is that they were a key part of how bookies ensured that they weren’t on the losing end of bets as often as they possibly could.