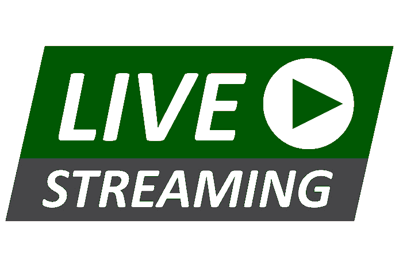 For many people, placing bets online is still a relatively new phenomenon. There’s nothing wrong with that, of course, as it often takes a while before things become ingrained into every day life. Certainly for people of a certain generation placing a bet was exclusively done at a bookmaker’s shop, with real money and a real slip of paper. Yet nowadays the development of things such as online banking means that more and more people are – rightly – trusting companies on the internet for monetary matters.

If you’re reasonably new to online betting then there are certain terms and features of it all that you may not understand. Worry not, though, as that’s exactly what we’re here for. Of course to some people the idea of explaining what a ‘live stream’ is is like teaching grandma to suck eggs, but it’s worth reading through this section in case there’s something you didn’t know. After all, using a live stream for betting purposes has a different connotation to it than streaming a film via Netflix or the likes.

UK, Ireland, USA and Dubai
Watch For FREE
Visit Site
Watch Free brings your favourite races live to your mobile or tablet. This exciting addition really takes you into the heart of the action with four unique camera angles. Watch Free will activate 15 minutes before each race. T&C's Apply 18+ #ad

We’re now at a point in time when it’s far easier to identify bookmakers that don’t offer Live Streaming, though even they will likely be in the process of trying to. It’s such a popular feature with punters that a bookie would be silly not to offer it if they’re able to.

RaceBets is a company that offers almost unrivalled coverage of horse racing (at the best rates) through Live Streaming, for example, with other ‘big guns’ such as Ladbrokes, William Hill, Coral and Betfair having great packages.  For a true specialist, with global streaming dedicated to racing, try RaceBets.

What is Live Streaming? 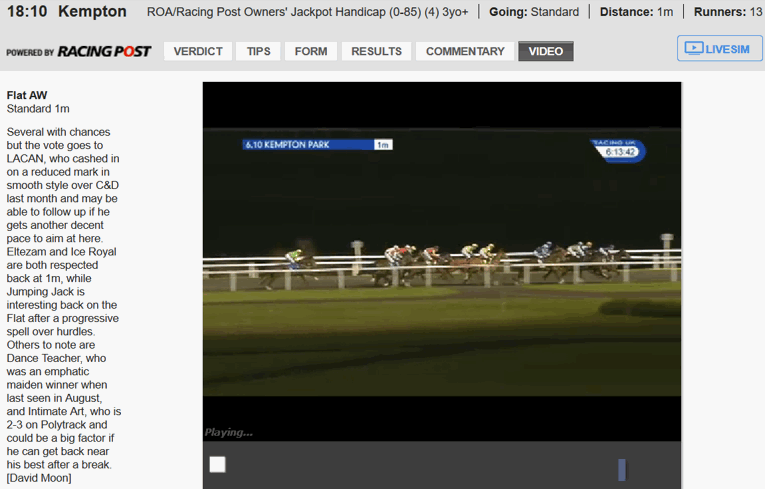 Not all sports or events are shown live on the television. Plenty are, of course, especially with the advent of Sky Sports, BT Sport, EuroSport and the likes. ITV Racing coverage of horse meetings is generally very good, but even they can’t necessarily show every single race live because of other network commitments. It’s also worth noting that not everyone can watch a TV all day, because of things such as work, family events and just being out and about.

Put in its most simple terms, Live Streaming is when a bookmaker will show a sport, event or race live via the internet. You can therefore sit at home and watch something that you might otherwise have missed, streaming it via your computer, tablet, laptop or phone. Live Streaming is an ideal feature for people on the go, for example, or for people whose other half isn’t that big a fan of sport and would quite like to watch Coronation Street on catch-up, if it’s all the same to you.

How To Stream Live Races

Firstly, not all sports, events or races are Live Streamed. Often this is because of market restrictions, such as the Premier League not wanting to lose out on the massive amount of money brought in by selling the TV rights to a production company. Obviously in this instance we’re only really interested in horse racing, but even then there are some restrictions that stop a bookmaker being able to Live Stream every single race throughout the year.

Most good bookies now stream all races from the UK and Ireland, but double-check before you assume you’ll be able to watch the race you’re after live.  See our table at the top for a list of the best streaming bookmakers along with minimum stake requirements and coverage. 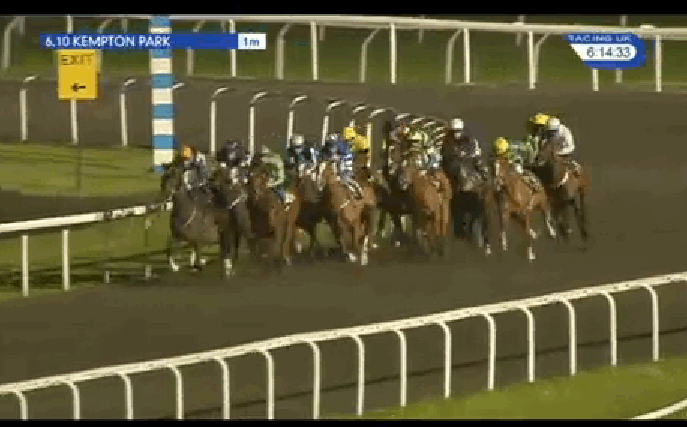 One of the most important things you’ll need to know is whether or not you have to place a bet in order to Live Stream a race. The majority of bookmakers keep this fee quite low, so you’re probably likely to have to spend about £1 (on average) in order to watch a race online. Some bookies only ask for you to have a positive account balance with them to stream other sports, so that’s not necessarily a hardship either.

Watching racing live can be useful for a whole host of reasons, not least of which is the fact that it will give you a sense of how the going is for the races that are still to come. That sort of information is likely to be worth much more than £1.  RaceBets are industry leaders, with them you only need to bet £0.50 or £0.25 each-way to watch a live race.  They also cover racing worldwide.

Something else that you’ll want to know, if you don’t already, is that it’s not unheard of for bookmakers to restrict access to their Live Streams for people who are in a foreign country. Say you’ve popped off to Spain for a few days rest and recuperation around the time of the Cheltenham Festival, don’t be surprised if you get a message telling you that the lice stream is not available. Again, this is due to rights restrictions and there’s no real way around it. 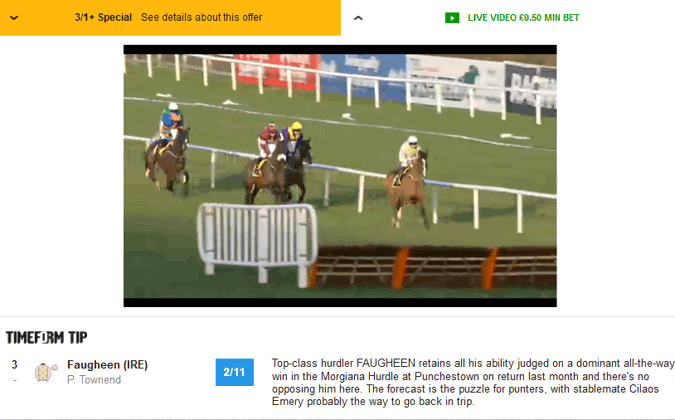 Equally if you’re in the UK and you’re trying to place a bet with a German bookmaker or the like, you might well find that you’re ability to do so is limited if they don’t have a license to stream events to the UK. This is not the same as a company that won’t show you a race taking place in Dubai, as that is more down to what license they’ve got for the broadcasting of foreign events.

Some bookmakers don’t offer live streaming but do have a nifty alternative, such as a simulation. This is where a computer ‘makes’ the horses and you can see them move up and down the ‘course’ in real time. This is not, in and of itself, a brilliant alternative to simply betting with a bookie that has a live stream.

Yet one thing you might want to look out for is a bookmaker that runs simulations of the race using that system before it takes place. They’re not always 100% accurate, of course, as any number of things can happen in real life that a computer can’t predict. But it might give you a good sense of which horses are likely to run well if you’re hoping for some Each-Way options.

How To Live Stream At Cheltenham 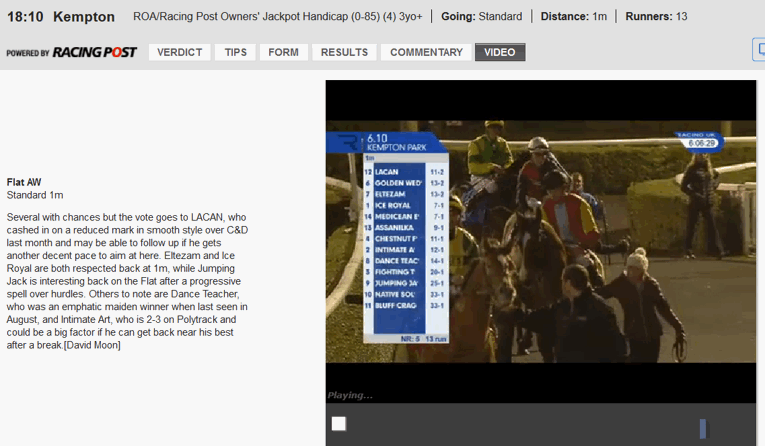 If a bookmaker doesn’t have a Live Streaming option then that doesn’t mean you shouldn’t bet with them, of course. In fact, given that we always recommend having a number of different betting accounts with various companies, there’s nothing wrong with placing your bet with the bookie with the best odds or offers and watching a race live via a competitor’s site or app. You might need to place a small bet to do so, as we said before, but you could always opt for a horse with long odds so that if it comes home you’re doubly happy.

As mentioned earlier, you’ll only really get a feel for the going at an event like the Cheltenham Festival if you watch the race take place with your own eyes. Are the horses struggling a bit more than usual? Have some of them set a cracking pace? Watching live will tell you why. Live Streaming the first race of the day at the very least will give you a sense of how the rest of the day is going to go. You might have read online that it’s raining only to look at the Live Stream and see that it’s absolutely hammering down – does that change your mind for the last race of the day? 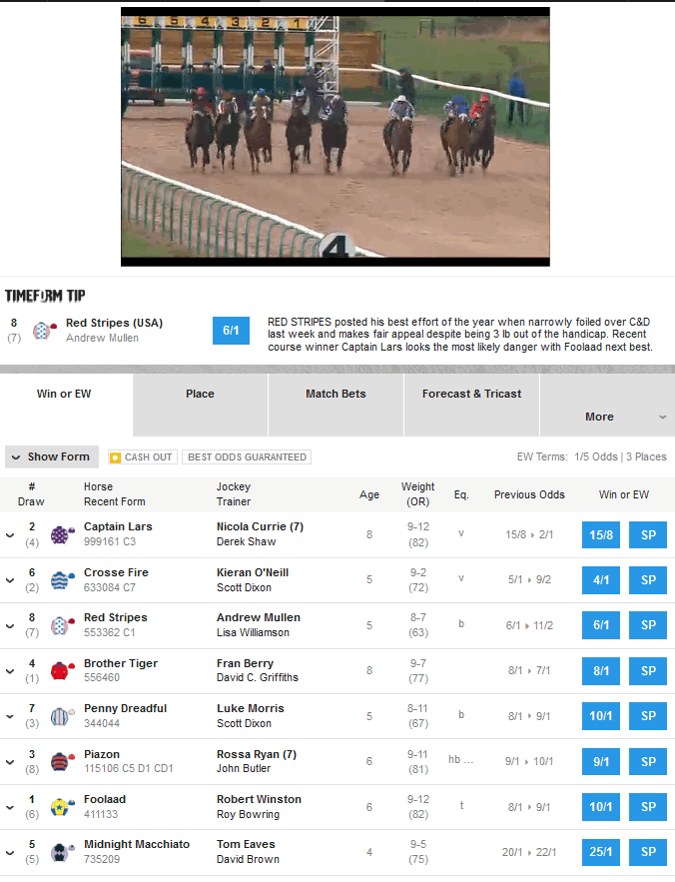 Some bookmakers allow punters to bet in-play on races. When that’s the case you really need to be watching the event take place in order to know what some good bets are.

An online commentary might inform you that a horse with long odds is at the back of the field, but watching the Live Stream you might notice that it’s only a head away from the middle of the pack and looks like it’s got the power in it to break. You might opt for a nice little Each-Way bet in-play that you wouldn’t have gone for if you simply trusted the written word.