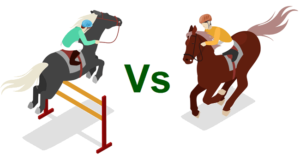 There are, of course, going to be certain crossovers between the two training styles. After all, both types of horse are going to run on a course against other horses, so the likes of temperament will need to be solid regardless of whether they’re a jump racing horse or a flat racing one. Ultimately, owners want their horse to be in the winner’s enclosure at the end of the race, so how do trainers facilitate that?

Generally speaking, flat races are either Conditions races, such as Group races or Listed races, or they are Handicap races. This is the case in the vast majority of countries where horse racing is a thing, so trainers know that if they’re working with a flat racing horse then they’ll need to prepare them for one or both types of race. The point about flat racing, of course, is that they take place on a racecourse that is as level as possible.

The lengths of flat races differ from event to event, but typically speaking they’ll come in at somewhere between five furlongs and three miles. Usually these races are a test of a horse’s speed, though the longer the race is the more important it is for a horse to be able to combine that with some stamina. That’s why the breeder of the horses has such an important job, picking the parents to ensure a good genetic makeup.

After they’ve been foaled, the racehorse will be groomed, exercised and given appropriate nutrition in order to prepare them for sale or training, depending on what the owner wishes to do with them. Handling is important in the early stages of a horse’s life, getting them used to be handled by humans. Once they’re old enough, at about one, the breaking in period will begin, including lunging and tack.

At the early stage of a horse’s life, teaching it how to be ridden is important. This requires a brave jockey, given that horses will rebel against it and try to unseat them as much as possible. Once they’ve accepted a jockey, however, the process of getting them to move forward and ensure that their head is well-positioned begins. This is all part of a horse’s life before the training proper even gets underway.

Most horses will arrive at the training yard broken in and with the ability to carry themselves well. It’s at that point that the training proper begins, starting by deciding what career path they will follow. When it comes to flat racing, the sire and mare will be used to guide this decision making, with their own specialties used to figure out what is likely to be best. Is the horse likely to be a stayer or a sprinter, for example?

The choice will be narrowed down during the training, which will begin with cantering and galloping before increasing to improve their fitness. The muscle will be built up slowly over a period of months, at which point faster work will be introduced. It’s at this point that whether they are fast or better at distances will be figured out, alongside what type of Going suits their running style the most.

The type of training that race horses are put through nowadays is significantly improved over what it was decades ago. Swimming pools are used quite commonly, which differs from the days when Ginger McCain would take Red Rum running along Southport beach in order to cure leg problems he had. Red Rum, incidentally, was a flat racing horse that turned to National Hunt racing and won the Grand National three times.

A key part of training for a flat racing horse that differs from jump racing involves getting them used to entering and running out of a starting gate, which is used often in the world of flat events. It is unnatural for horses to enter such confined spaces, so it’s a crucial part of the training to ensure that they’re not bothered when they have to go into a stall. Once they’ve mastered that, they’ll be ready for competitive racing.

There are obviously a number of similarities between flat racing and jump racing when it comes to the initial part of a horse’s life. Flat racing horses are far more likely to be bred from thoroughbred racehorses, the same is not necessarily true of jump racing. There’s also the fact that flat racing horses tend to be used for breeding in later life, whilst many jump racing horses will not be and will be gelded early on.

Jump racing requires a larger degree of stamina than flat racing, with the race distance combined with the necessity to get over obstacles requiring much strong horses to compete. The result is that National Hunt horses are much older by the time that they start to enter training, often not even taking part in events until an age at which most flat racing horses will have retired or been put out to stud.

Jump racing horses are bigger and stronger than their flat racing counterparts, with trainers being less interested in making them look elegant and refined. The distances of jump racing events tend to be from two miles through to about four and a half miles, with some being even longer than that. The races will have conditions that must be met, such as the age, weight and ability of the participating horses.

Whilst it sounds simplistic, there is a major need for the trainers to ensure that a horse knows how to jump over obstacles. National Hunt horses usually begin their careers taking part in what are known as Bumpers, which are flat races on jump racing courses. They will then graduate to taking part in hurdle events, which involve them jumping over obstacles that are smaller and more malleable.

After getting to grips with hurdles, a horse will eventually be old enough, strong enough and with enough stamina to take part in a steeplechase event. This involves jumping much taller and more difficult fences. As a rule of thumb, smaller horses will be betting over hurdles, whilst larger horses will be aimed towards fences. Most horses will begin life taking part in point-to-point events before moving to proper jump racing meetings.

One thing that we haven’t mentioned so far but that is important to flag up is the fact that jump racing is a seasonal activity. That is to say, flat racing tends to be done in the summer months and jump racing is more commonly associated with the winter and spring. There is jump racing all-year round, but most National Hunt meetings begin in the autumn and last through to about May.

Officially, the flat racing season gets underway with the 2,000 Guineas at Newmarket in May. It will continue through until Champions Day, which is held at Ascot in October. Again, though, there is far racing all-year round and the all-weather courses are used to host such meetings out of the traditional season. Some courses, such as Ascot, will host both types of racing but will always be more closely associated with one in particular.

It is not unheard of for flat racing trainers to get their horses to jump over obstacles in order to ensure that they know how to think through different problems. It also gets them using different muscle groups that can be helpful when it comes to racing on the flat. It can often be used as a method of changing behaviour in difficult flat racing horses, as well as to increase enthusiasm by not just doing the same thing repeatedly.