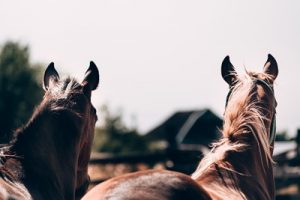 People that don’t know much about horses might well imagine that they mostly look the same. It is not uncommon for a grey horse to receive a significant number of bets on it, for example, simply because it looks different to most of the other horses that are taking part in a race. Those that don’t know what to look for in horses to tell them apart can be forgiven for getting them mixed up from time to time, but you would imagine that the owners, trainers and those that help at yards are more than able to tell one horse from another.

If that is what you think then you might well be surprised to learn about just how many times one horse has been mistaken for another by the people that work closely with them on a daily basis. The wrong horse running in a race can, of course, be a major problem, given the numerous different rules and regulations in place for each and every horse race that takes place. A horse might have been given an allowance that it wasn’t supposed to, for example, to say nothing of the number of people betting on one horse but being paid out on another.

Let us begin this piece by looking at the Newmarket race in October of 2020 when champion Irish trainer Aidan O’Brien got his runners mixed up. Heading into the race, O’Brien had decided that 50/1 shot Snowfall should be ridden by James Doyle and carry the number nine. Mother Earth, meanwhile, came from the same stable but was 18/1 and should have been ridden by William Buick whilst wearing the number five. Somehow, the two fillies were given the wrong cloths, meaning that they rode with the incorrect numbers.

Because jockeys will often look for the numbers of the horses that they’re running, Doyle climbed onto Mother Earth with the number nine on and Buick got onto Snowfall, who was wearing the number five. Neither jockey realised their mistake, meaning that they carried out the race to the best of their abilities with the horses that they were riding. At the end of the event, Snowfall was declared to have finished third and Mother Earth eighth when in actual fact the opposite was true. The race was won by a horse trained by Aidan O’Brien’s son, Joseph.

Aidan O’Brien was quick to point out afterwards that he wasn’t actually at Newmarket for the race. Instead, he had been listening on the radio and was told of the mix-up after the event. It came to light when social media users were posting about the fact that Snowfall was much lighter than Mother Earth, questioning whether the right horse was running. O’Brien said,

“I didn’t see the race, I just listened to it. Someone brought it to my attention then afterwards – that someone had tweeted that they were the wrong fillies.”

An innocent enough mistake to make, of course, but an expensive one for O’Brien to deal with. The British Horseracing Authority amended the result to put the horses in the correct positions, but O’Brien was fined €4,500 as a result of the mix-up, even though he was quick to apologise.

Aidan O’Brien can take some solace from the fact that he isn’t the only trainer to have seen the wrong horse take part in a race. Not only that, but it happened to Jessica Harrington eight months later in an entirely different manner and one that many might consider to be entirely worse. Harrington was supposed to run Alizarine in the  two-year-old fillies’ maiden at Galway in July of 2021, but instead Aurora Princess took part in the event under Harrington’s colours. She had already won two races and was rated 79.

Alizarine would have been making her debut in the race, with Aurora Princess due to run later on that day. The discovery was made after Aurora Princess’ micro-chip was scanned as she was making her way out of the parade ring, leading the on-course vets to objecting to the result. Consequently, no ‘winner all right’ was announced in the immediate aftermath of the race. At the time of writing, the Irish Horseracing Regulatory Board arranges for horses to be scanned as they enter the racecourse and as they leave the parade ring, but not as they arrive at the track to prepare for the race.

Speaking of the matter, Harrington said,

“We ran the wrong horse. They are two bay fillies that look exactly the same. One has a tiny little bit of white on the back of her hind coronary band but they are the same size and very similar. My representative Bubba Amond held his hands up straight away. He had the saddle on by the time I saw her in the ring. It’s human error and I apologise to everyone.”

In a slight irony, once the mistake had been spotted Twinkle was named the winner, which is a horse trained by Aidan O’Brien.

It Happens Quite A Lot

Jessica Harrington said after the fact ‘It has never happened to me before, but I suppose it is always an accident waiting to happen. It’s not the first time it has happened to people.’ That might well prove to be something of an understatement, given the fact that it happened twice in a six-month period in 2017. A case of mistaken identity led Ivan Furtado to run two horses in the wrong races at Southwell, with African Trader and Scribner Creek running in each others’ races. Six months earlier, Charlie McBride had made a similar error.

In the case of McBride, Millie’s Kiss had been saddled up for a race at Yarmouth instead of her stablemate Mandarin Princess, going on to beat her rivals that were all a year younger than her. That error led the BHA to say that identity checks needed to be carried out before a race got underway, which did actually happen at Southwell. The problem was, the people scanning the horses failed to interpret the data in the correct manner, both when African Trader was scanned and when the horse was dope-tested later on.

In fact, the error was only discovered when an analysis of the sample was carried out and discrepancies were noticed. The BHA didn’t pull their punches when discussing the matter, saying,

“This is the second time in six months where there has been an incident in which an incorrect horse has competed in a race. This is simply unacceptable; it affects the betting public, bookmakers and other participants and risks undermining confidence in the integrity of the sport.”

This seemed to ignore the fact that their own rules were followed on the day.

Furtado trains near Doncaster and was giving the two horses their first start under his stewardship when the mistake happened. The five-year-old geldings were part of a group of seven that came from the same yard at the same time, with their names being put on the doors of their stables. Furtado believes that at some point in the early stage they must have gone for a walk or similar and been put back into the wrong stables, having been treated as the incorrect horse ever since. He said,

“When I watched the replays and I realised, I said, ‘That can’t be possible’ because someone should spot it on the racecourse, but that obviously didn’t happen.”

When It Happened Intentionally 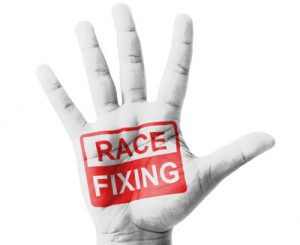 Giving all of the trainers involved in the stories above the benefit of the doubt, they were innocent mistakes that, as proven, could have happened to anyone. It is difficult to avoid the possibility that it could happen deliberately though, as we know from the tale of Gay Future and Cartmel Racecourse in the Lake District. It happened in 1974 and involved a plot that was as complicated as it was a work of genius. Nicknamed Operation Crock of Gold, the plan was invented by millionaire Tony Murphy and was only possible thanks to Cartmel’s remote location.

The plan involved two horses that looked very similar, one of which was more than capable and the other entirely useless. It also required two trainers to be involved, one well-known and capable to train the good horse and the other unheard of. Gay Future was the horse with ability, having won a few times on the flat in Ireland. The other horse involved in the plot was unnamed and hadn’t even taken part in a race but it looked like Gay Future and that was good enough. When the unnamed horse travelled from Ireland to England, it did so on the papers of Gay Future.

The scam could only work because Cartmel was not connected to the Exchange Telegraph system, with the only way of contacting the course and the bookmakers on it being via a telephone in the village. On the morning of the race, Gay Future was due to be raced by Jimmy McNeil, but on the day the top Irish amateur Tim Jones would take his place. Tony Collins was told to enter two horses in addition to Gay Future in meaningless races, with the plan being that they would be included on the bets on Gay Future to distract from the nature of the wagers.

Ankerwyke and Opera Cloak were the names of the other horses, with those involved in the conspiracy travelling around London betting shops and placing £10 Doubles and £15 Trebles on the three horses, knowing that when two of them didn’t run the money would all go on Gay Future. By the time that William Hill realised that something was going on, Murphy’s team had placed more than £5,000 on Gay Future. Ladbrokes attempted to send a man on a horse to Cartmel, but the bank holiday traffic meant that he didn’t arrive until the race had already taken place.

Gay Future was 10/1 when the race got underway, thanks to the fact that most people thought it was an unfancied horse that hadn’t run before. The bookmakers couldn’t call the on-course bookies to tell them to shorten the price because a member of Murphy’s team was using the telephone in the village. In the end, the horse won by a distance but many of the bookmakers refused to pay out, believing that they were the victims of a scam. The entire thing fell down when Sporting Life called the yard to ask about Ankerwyke and Opera Cloak.

When they did so, one of the workers said that they could see them out of the window and that they hadn’t left the yard all day, unveiling the key part of the plan. Collins later said that if he’d been told about the importance of those horses to the plan he’d have sent them and withdrawn them on the day, but as he wasn’t he’d placed about £400 in Single bets whilst everyone else was placing Doubles and Trebles. It was, he said, such a simply part of the plan but it turned out to be a crucial one.

Was the Gay Future plan the only one that has taken place over the years involving horses that look similar to each other but actually weren’t? Have there been more instances of trainers entering the wrong horse for a race, only to be scuppered by some eagle-eyed person on social media or at the racecourse? Obviously we’ll never know, but the sheer amount of times that a case of mistaken identity has happened in recent history suggests that the major difference between Gay Future and other such cons was that those behind Gay Future got caught.